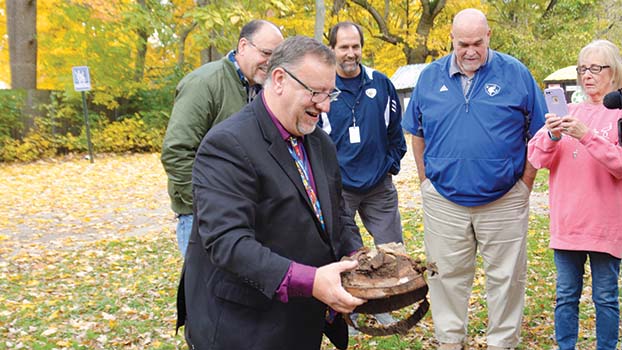 Brian Ballard holds the remains of a time capsule that was buried by Westside Elementary students in 1976. Ballard is a former Westside student who was among those to gather Friday to see the capsule, which was discovered at the former district administration building, 111 Spruce St. (Leader photo/KELSEY HAMMON)

NILES — Brian Ballard was in the sixth grade when his fellow students at Westside Elementary marched outside on May 4, 1976, to bury a time capsule.

That day, each student had carefully selected an item to place inside the capsule, which was sealed and then buried at the foot of a tree on the building’s west side. Ballard, who was 12 at the time, said he remembers selecting a shiny Hot Wheel car and putting a note inside.

“Everybody just sort of forgot about it,” Ballard said. “But I didn’t.”

The capsule was supposed to be uncovered in 2000, but it sat instead for 42 years, until Friday, when Ballard, of Hopkins, Michigan, returned to the former Westside building, 111 Spruce St., with the hopes of unearthing the time capsule buried by his classmates.

Ballard was joined by a small crowd who watched as he began to dig. While Ballard said he was not sure that he would find anything, it only took a few minutes to unearth the treasure. The capsule, which appeared to have mostly eroded away, contained only two of the many items his classmates had put inside: a Niles Daily Star edition from May 4, 1976, and a wax-sealed jar with a scroll of paper that students and staff had signed.

After brushing off the loose dirt, Ballard held the items up to show to the small gathering, which included his brother, Jeff, former Westside teacher Chuck Luke, parents and Dan Applegate the Niles Community Schools superintendent.

There was no Hot Wheel car, but Ballard said he was happy to find anything at all.

Ballard is a teacher in Hopkins,  but stayed in touch with some of his Westside classmates, including Cindy Vinnedge Johnson. He said the idea to find the time capsule started as a running joke between them. Ballard said he heard the school building was going up for sale, and so they kidded that they would one day dress in black and sneak onto the school grounds and dig up the capsule.

It turns out Ballard did not need a disguise to have access to the capsule. Applegate gave him permission when Ballard contacted him and told him that he wanted to look for it.

“When Brian approached me, no one else had even mentioned that there was anything buried under here, so I had no idea,” Applegate said. “With all the renovations of our schools … we have gone through and found a bunch of stuff sitting in halls and classrooms.”

While Vinnedge Johnson has since passed away, following a battle with a rare form of cancer, Ballard said her death inspired him to finally visit the school and uncover the capsule. On Friday, he got to share the moment with Vinnedge Johnson’s parents, Judie and Dave Vinnedge, of Niles, who visited Westside for the occasion.

Ballard said it was momentous finding what remained of the capsule and thinking about his fellow students’ lives since their days at Westside Elementary School. As a teacher himself, he said he believes time capsules can create a learning opportunity for the students involved.

“A public school is a dynamic machine, and it’s through activities like that time capsule that you spark those little engines, and you send those kids out in the world to become anything they want,” Ballard said.

After the discovery Friday, Ballard has recommended the items found in the capsule be archived by the school and re-interned in another time capsule. He is hoping to find his fellow Westside classmates and reunite them to create a new time capsule, holding the new items and old items, too.

Applegate said he hopes Friday’s discovery sparks some conversation and encourages other students to reach out and share where there might potentially be history ready to discover.

“I just hope other people find out about this, and they can contact me if they want to take a look at the stuff,” Applegate said. “I think this was fun It was a little treasure hunt.”