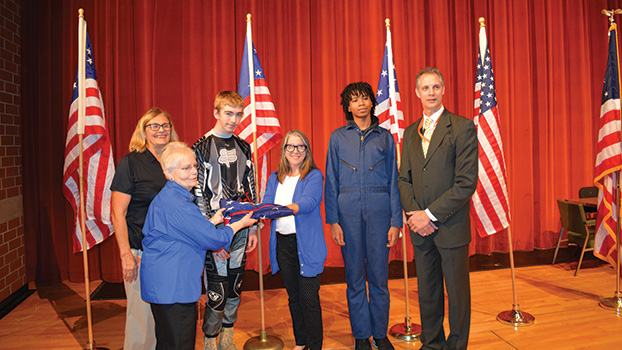 DOWAGIAC — While most were enjoying Halloween celebrations Wednesday morning, eighth graders Colin Gerner and Josh Stokes were gaining a new appreciation of the American Flag.

Together, the students handled a red, white and blue flag, raising it on a flagpole to fly over Dowagiac Middle School.

In the background, several adults watched over, and Ann Biek, president of the Auxiliary of VFW 1885, gave the young men pointers to ensure they secured the flag correctly.

“Make sure to lower it to half-staff,” she said. “There. It looks great.”

The raising of the flag was part of a flag ceremony hosted Wednesday at Dowagiac Middle School. For the event, Dowagiac Middle School retired its old American flag as it was becoming worn, and the school was presented with a new flag courtesy of the VFW. Before Gerner and Stokes could fly the new flag, Biek presented to the middle school about the significance of the American flag and proper flag processes, such as never letting a flag touch the ground. Lynne Lawrence, exalted ruler of the Dowagiac Elks Logde, presented with Biek about the history of the flag, including the many forms it took before becoming the final product we see today, with 13 stripes and 50 stars. Together, the pair also showed students how to properly fold and transport a flag.

Both Biek and Lawrence said they were happy to present to the middle school students, saying that they believe it is important for students their age to gain an appreciation of the flag and all it stands for.

“This is their history,” Lawrence said. “This is a way to pass this on to the next generation. It is important for all students to learn the responsibility and respect of the flag.”

Biek added that it was important for students to learn about proper flag etiquette, because it ensures students will properly observe the flag in the future

“There is a flag code that we follow,” she said. “There are proper ways to treat the flag with respect.”

Outside of the presentation, Biek also that said she and others with the VFW and the auxiliary were happy to replace the flag at Dowagiac Middle School, saying it was something the organization does often for other schools. She said that it is important for all places to fly a flag properly.

“It is just plain, ole respect of the United State [to replace a flag] if it dirty, soiled or tattered,” she said. “We do this because it is important for us to treat the flag with respect.”