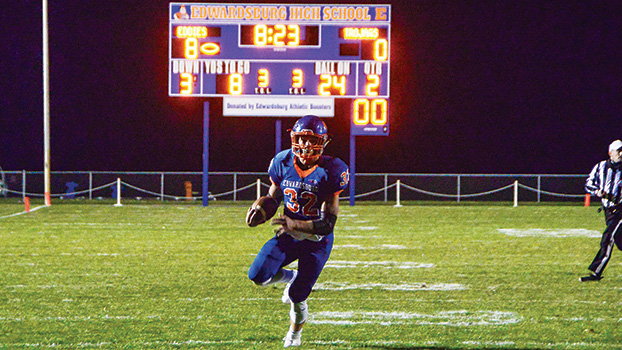 EDWARDSBURG — Of the 32 high school football teams who qualified for the Division 4 playoffs, Edwardsburg was one of only two unbeaten teams.

But only one team advanced, keeping its perfect record alive, and that was the Eddies.

Leo Hoffman field was packed with blue and orange last week as fans watched a typical Edwardsburg team run touchdown after touchdown into the endzone. Grabbing its fifth shutout of the season, the

The Eddies improved to 10-0 with a 45-0 win over Plainwell and advance to this week’s district final against Paw Paw.

Along with Edwardsburg’s perfect record, they currently hold the title for most shutouts in a season of the 16 teams now left in the playoffs. Add to that the AP’s No. 1 ranking of the Eddies for most of the season, and it’s safe to say they are the team to beat.

But players and coaches are not jumping too far ahead just yet because everyone knows anything can happen now.

“We are taking this one game at a time,” said Edwardsburg senior Isaiah Miller. “It’s only going to get harder from here. Tonight is just the start of playoffs and we came out ready to play, but we have to keep that focus every week now.”

Mitchell scored a 9-yard touchdown for the Eddies in the third quarter and ended the night with 54 rushing yards.

A scoreless first quarter wasn’t what Edwardsburg had in mind, but the game quickly changed pace when the Eddies had a much-needed offensive explosion, adding 30 points to the scoreboard in the second period alone.

Caden Goggins scored the first touchdown for Edwardsburg, running the ball in from the 27 yard line. Chase Sager, who led Edwardsburg offensively with 87 yards, scored the next three touchdowns.

“He (Sager) is a tough kid whether he’s on offense or defense,” said Edwardsburg coach Kevin Bartz. “He runs through tackles and was big for us offensively tonight.”

Mitchell’s touchdown in the third prompted a running clock for the remainder of the second half, while Mac Gaideski’s three-yard touchdown more than sealed the deal.

Edwardsburg ended the night with 347 offensive yards, far surpassing the 131 yards put up by Plainwell.

The Eddies will face a tough Paw Paw team on Friday night at home at 7 p.m. Although Edwardsburg beat the Redskin earlier this season, 41-0, Bartz said the team is on a roll and has improved.

“They are one of the toughest teams we faced defensively all year,” he said. ”They are just a physical team and we have to be prepared for that.”

As for Mitchell’s take on Paw Paw?

“It’s showtime,” he said. “They’re going to put up a fight, but we will be ready and excited.”