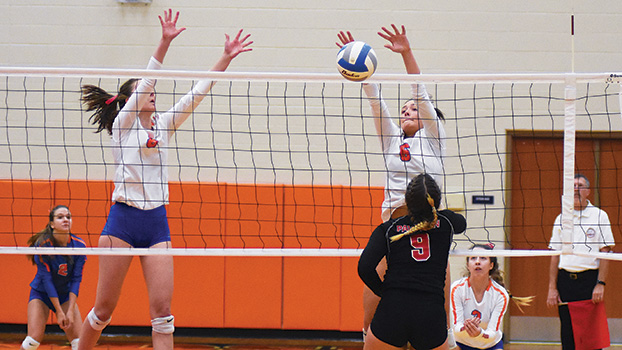 EDWARDSBURG — When the MHSAA switched from classes to divisions in volleyball this season, two teams that won district championships last season ended up at the same site for this year’s tournament.

Host Edwardsburg and Niles were both Class B district champions under the old format in 2017.

The two are in opposite brackets in the Division 2 district tournament this season, which would mean that they could meet in a rematch of the regional title match from a season ago.

Both teams advanced to the semifinals with victories Monday night.

The Vikings (21-20-2) are set to face Dowagiac (25-10-2) in the first semifinals tonight, while Edwardsburg will take on another Wolverine Conference foe in Vicksburg at approximately 7 p.m.

The winners will meet for the Division 2 district championship at 10 a.m. Saturday at Edwardsburg High School.

Despite losing freshman right-side hitter Marika Ruppart moments before the match with the Wildcats was supposed to begin, Niles turned in an inspired performance in defeating Three Rivers, which was the runner-up to the Eddies in the Wolverine Conference this season.

“My girls had a huge night,” said Niles coach Jenny Nate. “They have really focused on power and blocking at the net and that offensive and defensive play really paid off tonight.”

Harpenau led the Vikings with 25 kills, while Nate had 16 kills. The two also combined for five blocks.

“We play our game no matter what court we are on,” Harpenau said. “We do not care who we are playing. We just try to focus on ourselves and hopefully come out with a win.”

Nate noted that the loss of Ruppart forced the team to step it up.

“We had to overcome some adversity when one of our starters got hurt right before the match,” she said. “It did not affect us at all.”

The Eddies, who are the favorites to win the district title, came out on fire and never let up in sweeping Paw Paw.

Led by senior Skye Leach with seven kills, 14 digs, four blocks and three aces, Edwardsburg forced a rematch with Vicksburg in the semifinals.

The Eddies will be focused when they take on the Bulldogs as Vicksburg is the lone conference team to win a set off of Edwardsburg.

“I was nervous coming into it of course,” said Edwardsburg coach Sarah Strefling. “I said at the end of the day everyone is 0-0 and they are gunning for you. We have got to show up and do what we do every time we step in here. So, we have been practicing hard and I said why not get better? We have three weeks to go to state, why not get better? Stop being complacent, earn your points and get better every day.”

Like Niles, the dominating front line of the Eddies ruled the day.