Niles Operation Christmas Child to collect presents for children from Nov. 12 to 19 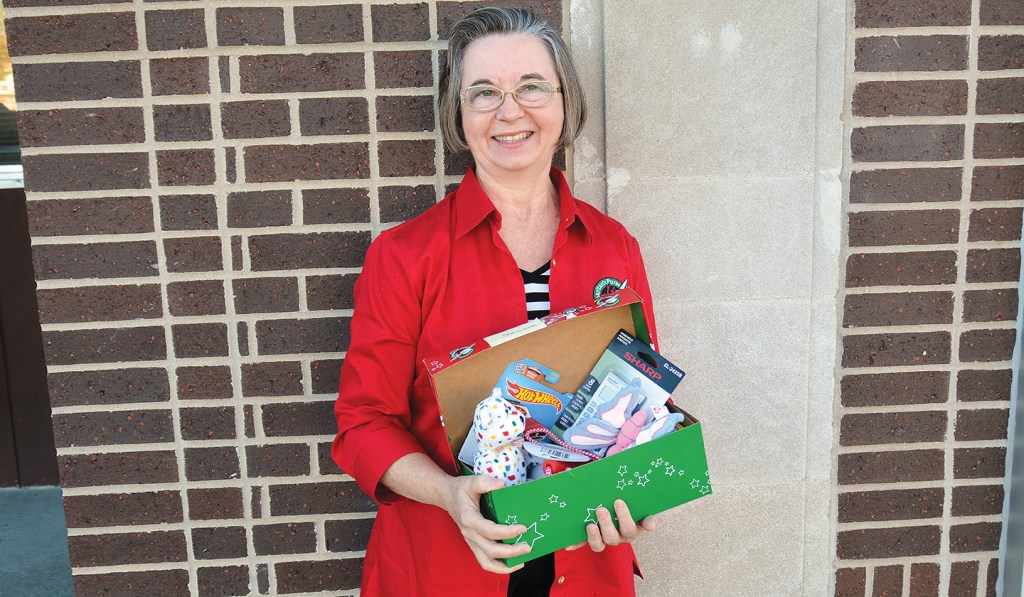 Esther Jones, the collection center coordinator for Operation Christmas Child, holds up a shoebox full of toys. The shoeboxes are sent to children in more than 100 countries. Starting Nov. 12, the OCC will be collecting gifts for children for this mission. (Leader photo/KELSEY HAMMON)

NILES —  What started as a modest effort about 22 years ago to put together a few shoeboxes for Operation Christmas Child has steadily grown thanks to the efforts of Berrien and Cass County communities.

This year, Esther Jones, the collection center coordinator, is hoping to continue to provide children across the world with the boxes full of gifts. To help, people can contribute donations or lend a hand to prepare boxes for shipment. Collection week will take place Nov. 12 to 19, at the Niles Adventist School, 110 N. Fairview Ave. in Niles. The drop off location serves both Berrien and Cass counties, as well as some of the northern Indiana region.

Those interested in contributing to Operation Christmas Child are asked to find a shoe box and fill it with toys, hygiene supplies and school materials. Those who need a box can get one preprinted at samaritanspurse.org. There are a few things people are asked not to donate, including candy, toothpaste, gum and used or damaged items. A complete list of prohibited items and recommended items can be found online.

While the boxes themselves are generally full of gifts that cost less than $10 total, the reward to children who receive the boxes is invaluable, Jones said.

“It’s huge,” Jones said. “It changes their life. [You might think] how can a box that has that small of value change someone’s life? But it happens all the time. That is what drives me on.”

More than 100 countries around the world are recipients of Operation Christmas Child shoebox gifts.

“They are often war-torn countries. [These] children are living among disease and disaster,” Jones said.

Niles Little Cesar’s Pizza is also offering a promotion for those who contribute to Operation Christmas Child. The restaurant will give a free large pepperoni pizza to anyone who donates a shoe box between Nov. 7 and 10.

Students from the Niles Adventist School also get involved with the project and help to prepare the packages for shipment as part of their Bible lab. While students will help again this year, the students do not have school on Nov. 19, the final packaging day. Jones said she will need lots of help on this particular day, because the students will not be able to serve.

Jones has been involved in collecting the gift boxes for the past 22 years. She said the tradition got its start when the Buchanan Seventh Day Adventist Church, which Jones was attending, set out a goal to pack and ship 40 boxes.

However, the community responded with so much more, bringing about 550 boxes to donate. From there, the number of boxes that were collected each year continued to grow. Finally, Operation Christmas Child coordinators decided to designate the area as a drop-off location, as the community was successfully able to contribute a large number of boxes and because the area is a central location in between Grand Rapids and Indianapolis.

The growth of the mission had an impact on Jones.

“It made me step back and realize this project is not mine at all,” Jones said. “We are just trailing behind it and doing our best and it still remains that way.”

In the years Jones has participated in the effort, she has helped Operation Christmas Child across numerous fronts from bargain hunting at local stores to finding presents to filling the boxes and troubleshooting when things go awry. This year, when a longtime donor could no longer support the effort, Jones had to come up with a way to raise money for shipping costs. To help, she hosted a garage sale, which was successfully able to raise more than $900.

Jones said this year’s goal is to collect 36,500 boxes throughout the region. With the Christmas season approaching, Jones encouraged people to get involved and give the gift of giving this holiday season.

“The box is a glimmer of hope and joy to these children,” Jones said. “There’s never going to be enough shoeboxes. The need is so incredible.”