Stanger steps down after 16 seasons at Dowagiac 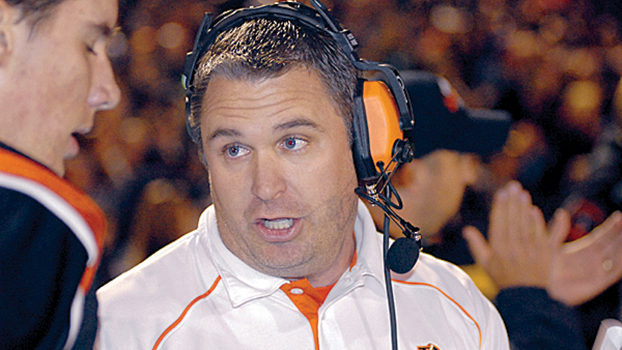 DOWAGIAC — For only the third time in 29 years, the Dowagiac football program is searching for a new head coach.

Mike Stanger submitted his letter of resignation to athletic director Brent Nate Oct. 22 and told his team he was resigning after 16 seasons at the helm of the Dowagiac football program last Wednesday.

Stanger coached teams reaching the state playoffs in 11 of his 16 seasons, including six of the last eight years, and were undefeated in 2012.

Stanger said he knew it was time to step away from coaching to spend more time with his family.

“They say as a coach you know when it is time,” Stanger said Monday afternoon. “I knew it was time. It has been my life for the last 16 years. It was tough.”

Stanger said that getting to see more of his wife and kids played a key factor in his decision to step away from the program.

“I had a daughter play volleyball this year on the eighth-grade team and she did really well, but I never got to see her play,” he said. “I went to the Coloma tournament the day after we lost to Paw Paw she played a lot. If I was to coach again next year, my freshmen and JVs play on Thursdays away and my daughter will be home playing freshman volleyball. I had only missed one freshman-JV game in 16 years and that was when my wife was giving birth to one of our daughters.”

Stanger knew if he wanted to get to more of her games he would have to have the assistant coaches go to those football games. He decided that was not in the best interest of the program.

“I have a daughter who will be going off to college,” Stanger said. “This summer I want to spend time with them. I had to choose between the Fourth of July weekend or the first week of August before two-a-days. As head coach, I felt it was my job to be in the weight room all the time and be on top of it because it’s my program and my responsibility.”

After a pair of losing seasons, the Chieftains took off under Stanger and his staff.

Dowagiac qualified for the state playoffs five consecutive years and seven out of the next eight seasons, including a Division 5 district championship in 2011.

The Chieftains were eliminated from the postseason in the regional championship game by Lansing Catholic Central, which was led by quarterback Cooper Rush, who is now the back-up quarterback for the Dallas Cowboys.

Between 2007 and 2017, Dowagiac has won at least one playoff game in five of the six years they reached the postseason.

Stanger came to Dowagiac wanting to continue the rich tradition of Chieftain football. He has more than done that as he leaves as the second winningest coach behind Bernard Thomas.

“It has been a privilege,” Stanger said. “I am honored. I came here not knowing anyone at all. It was an opportunity to come and stand on my own two feet. I left my high school where everybody knew me, went to college and then came back and coached there for seven years. It was a chance for me to leave there and not be right under the guy who had coached me.”

Stanger credits the players and the coaches for the success Dowagiac football has enjoyed over the past 16 years.

“We had great kids and great coaches,” he said. “I made it a point to call all the guys I coached with. They were just great guys. I will miss that a lot. The comradery with the kids and the coaches. That would be the hardest part.”

Nate will be meeting with Dowagiac Superintendent Paul Hartsig to begin the process of deciding what the district will be looking for in its new coach. A committee will be put together and once the posting has closed, potential coaches will be interviewed.

“Anytime a coach resigns it is a shock,” Nate said. “We have had two coaches in the last 29 years, which talks to the stability of the program.”

Nate pointed out that the football program has reached the postseason six out of his eight years as athletic director and that Stanger and his staff had the fifth undefeated season in school history, made the third longest playoff run in school history and reached the regional finals for the first time since 1996.

“He did things the right way,” Nate said. “I would say he was football 363 days out of the year. His record speaks for itself. He helped countless numbers of players play college football. The past two years we have been academic all-state. It is a loss for our program.”