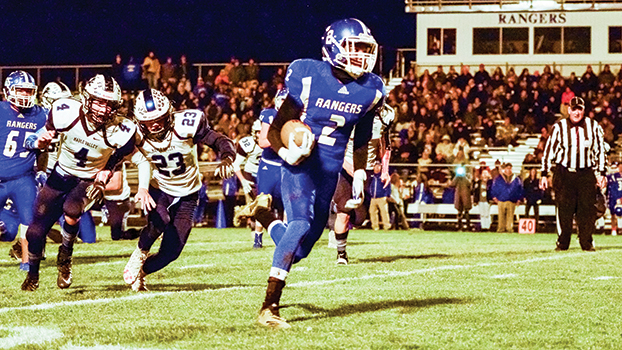 CASSOPOLIS — Being the favorite is not always the best thing for a team entering the postseason.

The host Cassopolis Rangers may have felt the weight of expectation on its shoulders against Vermontville-Maple Valley in the opening round of the Division 7 state football playoffs at William F. Scott Field Friday night.

The visiting team got on the scoreboard first and took advantage of some mistakes early on, but could not maintain that momentum, nor could the Lions stop Cassopolis running back Tyrese Hunt-Thompson in a 49-6 loss to the Rangers.

Cassopolis (10-0) was able to rebound from giving up an early 15-yard touchdown run to Noah Hanson, scoring on a 20-yard touchdown pass to Hunt-Thompson from Dylan Green to give the Rangers the 7-6 lead heading into the pivotal middle two quarters.

Cassopolis scored twice before halftime to take a 20-6 lead into the locker room where veteran head coach Dan Purlee and his staff had some adjustments to make.

“I was not,” answered Purlee about his disappointment in his team the first half. “I am still not real thrilled. I just thought we just had too many penalties in the first half. We need to learn to keep our mouth shut and not retaliate. They were jawing at us, but our kids need to learn not to take the bait.”

J.J. Hart scored both second-quarter touchdowns for the Rangers on runs of 38 and five yards.

After regrouping at halftime, Cassopolis came out and blew the game open with three scores in the third quarter.

Hunt-Thompson touched the ball three times in the quarter and found the end zone on each touch.

The Rangers, who will host Centreville at 7 p.m. Friday night in a rematch of the Southwest 10 Conference championship game from a week ago, scored the only touchdown of the fourth quarter on a 65-yard Mason Polomacak run.

“Just play football,” was the message at halftime,” Purlee said. “He (Hunt-Thompson) is pretty special. He can make plays. He sees the whole, makes unbelievable cuts and a great burst of speed.”

Purlee and his staff also had to make some adjustments defensively after the opening drive by the Lions.

“We came out in a defense that they have seen the last two weeks and they punched us in the mouth,” he said. “They were ready for it. We went to a different look and it helped us tremendously.”

Despite the early touchdown drive, Cassopolis held Maple Valley to just 163 yards of total offense. The Rangers have now given up just 30 points on the season.

Gage Collins led the defensive charge with 13 tackles, while Hunter Parsons finished with 11 and Ahsan Hart 10.

Cassopolis finished the night with 504 yards of total offense, including 463 yard the ground, led by Hunt-Thompson’s 181 yards on 12 caries. Hart added 160 yards on 14 touches.

The Rangers and Bulldogs will play for the Division 7 district championship Friday night.

“We have never been in a position like this before where you get a rematch like this so quickly,” Purlee said. “Our kids will be ready. They know what kind of opponent Centreville is.”

The winner advances to the regional championship game Nov. 9.

If Cassopolis wins, it would host the winner of the Monroe St. Mary Catholic Central-Clinton game.