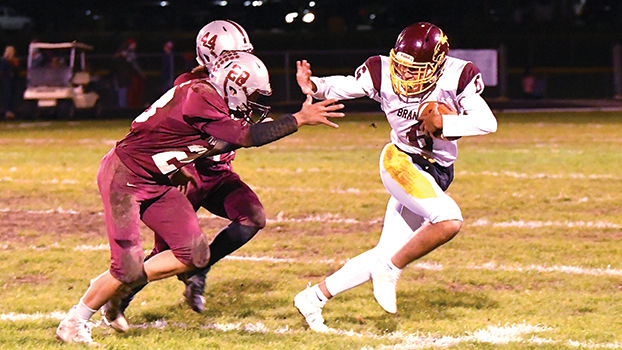 The MHSAA released its guidelines for re-opening sports when the state ends its stay-at-home order. (Leader file photo)

DELTON — For football fans who enjoy rough-and-tumble defensive battles, then Friday night’s Brandywine vs. Delton playoff game might not have been their cup of tea.

Delton defeated Brandywine in the Division 6 pre-district contest, 86-50, the third most combined points in a Michigan high school football game where the losing team scored at least 40 points.

The record was set during the 2017 season, when Climax-Scotts defeated Fulton in the Division 8 district semifinal, 84-62.

Muskegon defeated Hastings, 216-0, in a 1912 game for the most points scored ever in a state high school football game, a mark that will unlikely ever be equaled, let alone touched.

Friday on its sparsely turfed field, Delton rushed for 10 of its 11 touchdowns and piled up more than 450 of its 552 total yards via the ground game.

Swift scored four touchdowns and an eye-popping eight conversion runs en route to 255 rushing yards on 20 carries, while Roblyer chipped in with four rushing touchdowns, 161 yards on 15 carries and an 80-yard kick return to paydirt.

Brandywine simply had no answer for Delton’s Wing-T offense, and was forced to the air to strike against a cat-quick and physical Delton defense.

Junior wide receiver Shane Brown had a monster game for the Bobcats. The 6-foot-1 Brown was on the receiving end of five touchdowns and finished with 259 yards on 11 receptions.

“We knew that they would have the middle stacked pretty good,” said Brandywine coach Mike Nate. “We knew we would have to go to the air waves to put some points up, and we did. We put 50 on the board. It’s just too bad we couldn’t stop them.”

Junior Jordan Abrams accounted for five Brandywine touchdowns, including a pair of touchdown passes to Brown of 50 and 60 yards. Abrams also rushed for three touchdowns and finished with 126 yards on 21 carries.

Sophomore Robert Gordon left the game during the third quarter with an injury, finishing with just 47 yards on 10 carries.

“It’s just disappointing how it ended,” Nate said. “(Delton is) a good team. They played hard and I give them credit. They’re very physical and they outhit us.”

Delton jumped ahead early, leading, 14-0, after one quarter. McLane’s first scoring pass to Brown and a conversion run by Abrams made it 14-8 just 10 seconds into the second quarter.

And then the roof caved in for the Bobcats.

Delton scored 40 points during the second quarter, en route to a 54-28 halftime lead.

Brandywine responded with a pair of third-quarter touchdowns and trailed by a still competitive, 62-42, heading into the final 12 minutes.

Delton sealed the victory with three fourth-quarter touchdowns, including a 10-yard run by sophomore Anthony Scarsella with 47.9 seconds remaining, that was followed by a successful conversion pass.

“They must respect us,” Nate said. “I’m just not sure about a touchdown, a two-point conversion and an onside kick with (less than a minute) to play and you’re up by four touchdowns.”

Delton will next face Schoolcraft in the Division 6 district championship game, while Brandywine finishes its campaign at 7-3.

“That’ll be a good game between (Delton) and Schoolcraft next week,” Nate added. It’s tough, but we had a great season,” Nate said. “We have only four seniors. We’ll be back.”

Dowagiac falls to Lakeshore in its soccer opener