Witches on the porch continues tradition of spooking children, bringing community together 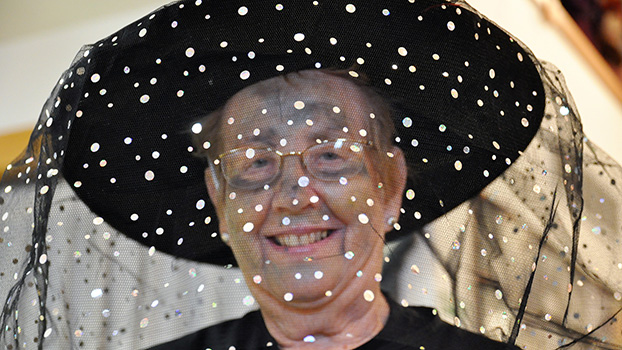 Pictured is a previous member of witches on the porch, Marj Braniff. (Submitted photo)

EDWARDSBURG — For more than a decade, the Edwardsburg Area Historical Museum has hosted a Halloween tradition called Witches on the Porch.

This upcoming Wednesday, Edwardsburg trick-or-treaters can visit the museum between 6 and 7 p.m. to get candy from a group of women affiliated with the museum dressed as witches.

“It’s been running probably close to 12 years and we’ve had a lot of witches and we keep having new witches all the time, and I did it for several years,” said Barbara Dempsey. “I haven’t done it for a few years, but I did it for several years and then I have a couple of years I dropped out because my grandsons were growing up, and I wanted to go over to their house and see them in their Halloween costumes.”

While this tradition may seem simple, Dempsey said it has become something Edwardsburg residents look forward to every year, especially the children.

No one goes inside the museum, but instead they visit the porch and receive candy from the witches, just like a typical neighborhood home on Halloween, but scarier, according to Dempsey.

“For a while, we had a cauldron running, you know, where it was throwing up smoke and spooky sounds,” Dempsey said. “The little kids are just scared to death. Parents bring them. We have a huge crowd comes because it’s gotten to be really a village tradition for the witches to be on the porch. We have people come from all over.”

High school students and older will also visit to see the witches.

To get ready for to be witches, the women involved spend a significant amount of time getting ready, from putting on makeup to painting their faces to wearing wigs.

The museum starts to collect candy months before Halloween by leaving a large bowl out for museum visitors and volunteers to put candy into.

“We collect candy for a couple months before Halloween,” Dempsey said. “Everybody brings candy and we put it out. We have a different bucket now, but we did for a long time put it in one of those aluminum bins for apple bobbing. We used to put it in there and everybody would just donate the candy from the museum.”

The witches will also play spooky Halloween music to set the mood, but Dempsey said that what really makes it a worthwhile event that has gone on for so long is how much the community has grown to appreciate it.

“I really think that’s what keeps it going is that the people in the village really like it,” she said. “We have tons of people. We have 100 kids come through some years getting candy from the witches on the porch and, and it’s funny to learn how to cackle, too.”