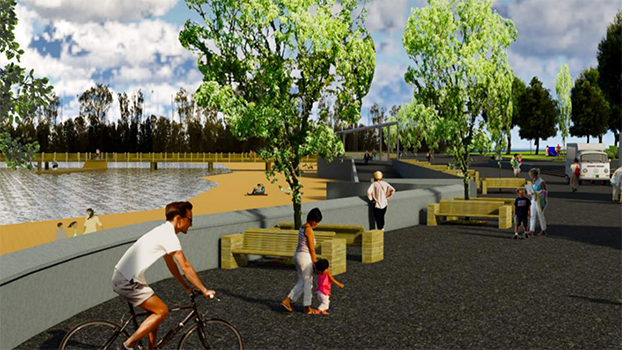 Pictured is an image taken from the proposed Village of Cassopolis master plan. (Submitted illustration)

CASSOPOLIS — For at least a year, the Village of Cassopolis has worked to put together a master plan to to care the community forward. Throughout this process, the village has taken input from residents at events such as Imagine Cass and related initiatives, which Emilie Sarratore, the village manager, said help shape the overall plan.

At sometime in the next few days, the master plan will be available to village residents to read and provide input. This more than 100-page document graphs, charts and detail explanations of how Cassopolis and improve its infrastructure for the next 10 years.

“Hopefully it will be available within the next day or two for anyone who wants to look at it and then it’ll be available over the next 60 days for comments, questions and concerns,” Sarratore said. “It’s not a final approval yet. It was approved for distribution. So I give anyone the opportunity to make changes and make suggestions.”

The plan will be available online and at the village office and the Cass District Library, as well as at several village municipalities.

Anyone can call, email or stop by the village office to share their concerns, which will be compiled and reviewed as the village prepares for the final approval of the master plan. This will take place at some point in mid-December.

“There are a lot of great items in the plan,” Sarratore said, “and this is the first step towards continuing the work we started with Imagine Cass.”

Sarratore said that some of the specific items from Imagine Cass and other community events that are in the plan include improving alleyways, a road diet and mid-block crossings.

“Willing to grow in way that will ultimately serve the community, the village has been diligent throughout the master plan process to include everyone in the creation of this document,” reads the introduction section of the Village of Cassopolis proposed master plan.

According to the document, this included senior citizens to children.

After the 60-day review period, the village will use the input from the residents to make changes to the plan before presenting it to the planning commission once again for approval. If the commission approves it for recommendation, it will then go the village council. According to Sarratore, these two approval process usually happen pretty close together.

Once the plan is approved, the Village of Cassopolis can begin going after funding for its protects and start putting the plan into action.

“In the state of Michigan, you really have to have a current master plan and a current parks plan,” Sarratore said. “Our new parks plan is incorporated into this master plan as well. So we updated both through this process and that will allow us to go after some additional grant funding.

“Then of course we have been working on how will fund some of these projects here at the village and we’ll probably look to January to the council to approve some of the projects in this plan so that we can march forward with them.”