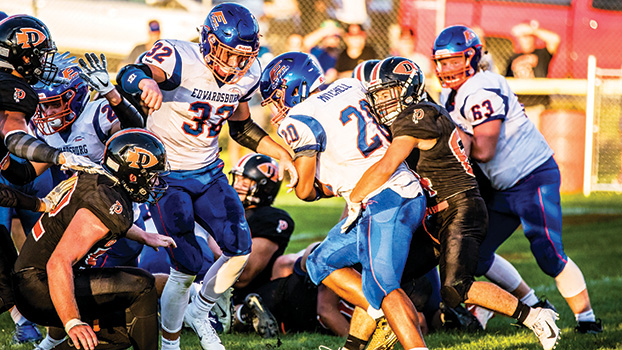 STURGIS — The Edwardsburg football team will roll into the playoffs with a full head of steam after shutting out host Sturgis 56-0 in the regular and Wolverine Conference season finale Friday night.

The Eddies completed their third undefeated season in the past four years.

Edwardsburg will host Plainwell in the opening game of the playoffs at Leo Hoffman Field at 7 p.m. Friday night (see related story page 10).

A 36-point first quarter left no doubt that the Eddies would not be sharing the conference championship this season.

Edwardsburg (9-0) opened up a 42-0 halftime lead and played the second half with a running clock.

Isaiah Mitchell had a big night running the football as he rushed for 103 yards on just four carries and scored a touchdown.

Chase Sager finished with 65 yards on six carries and scored on runs of four, two and 26 yards.

Caden Goggins, who opened the game with a 90-yard kickoff return, added 31 yards on three touches. He also had a 21-yard touchdown run.

Also scoring for the Eddies, who finished the night with 369 yards rushing, were Conner Nelson (18 yards) and Parker Szlanfucht (13 yards).

Nelson finished with 73 yards rushing on a pair of carries.

Defensively, Edwardsburg limited the Trojans to 104 yards of total offense.

Dylan McColley had an interception.