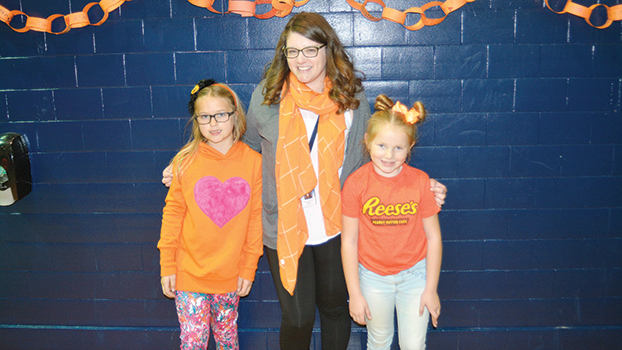 From left, Eastside Connection student Addison Okley, Keera Morton-Hayes, a student affairs specialist and Kenley Weston show off the orange they are wearing for Unity Day. The national anti-bullying day, teaches youth to unite and stand up to bullying. (Leader photo/KELSEY HAMMON)

NILES — In honor of National Bullying Prevention Month this October, students across the Niles district participated in Unity Day Wednesday and showed they are united in standing up to bullying.

Eastside Connections, students from kindergarten to eighth grade donned their brightest orange colors in support of Unity Day. The anti-bullying effort was organized by Keera Morton-Hayes, the student affairs specialist. Morton-Hayes described Wednesday’s efforts as a day where the whole school unites in kindness. Earlier in the week, she met with all classes to teach them some important lessons about anti-bullying.

“It’s about speaking up reaching out and being a friend,” Morton-Hayes said. “Speaking up when you are being bullied, reaching out to the person who was the victim of the bullying and continuing to check up on them and be a friend.”

In schools across the nation, bullying is an issue that needs to be addressed, Morton-Hayes said.

“It’s so prevalent,” she said. “I feel like bullying right now is such a buzz word among schools, because it is such an issue. It’s really important for kids to know the severity of that and that it is not something that we ever brush off.”

As part of anti-bullying campaign efforts this month, students learned tools they could use to stand up to bullying and also show support for their peers. One emphasis of the lessons was being an “Up-Stander” — a person who is kind and looks out for others.

Students also learned the best method for helping someone they see being bullied or how to get help if they experience bullying themselves. Morton-Hayes said students are taught not to ignore bullying.

“If you see someone who is unsafe or hurt, you always, always, check on them and say, ‘are you ok?’ and tell an adult,” Morton-Hayes said.

Another anti-bullying effort is the Buddy Bench. The bench sits on the playground and students can take refuge on the bench if they are having a hard day or experiencing bullying. If they spot someone on the Buddy Bench, students are encouraged to go up and talk to them.

“No matter what, you stop what you are doing and you go check on them,” Morton-Hayes said. “It kind of changes the air, instead of going off with the same people, it builds this culture of, ‘maybe I should reach out and check on someone else.’”

Students further demonstrated what they had learned for Unity Day by jotting down how they could be an “Up Stander” on a slip of orange paper. Using the paper, students formed a giant chain with their words and strung them up around the gym. Morton-Hayes said the paper chain emphasized how a bunch of kind efforts could unite to form something much larger.

“By yourself, it is just one little thing, but when it is hooked together it makes a big chain,” Morton-Hayes said. “The most important part of the cause is building community and making sure that they know that we are a team here no matter what.”