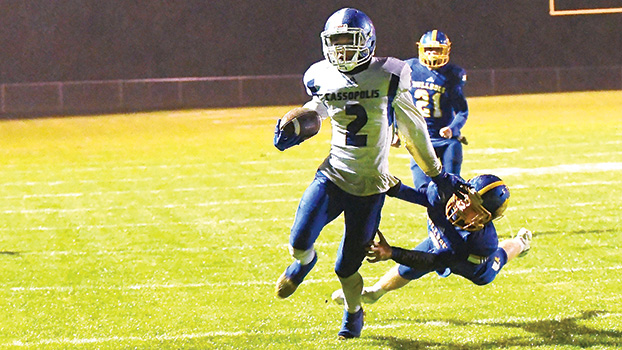 CENTREVILLE — Tyrese Hunt-Thompson scored a pair of touchdowns and the Cassopolis defense shut out host Centreville in a 21-0 victory that capped a perfect regular season for the Rangers Friday night.

The showdown was billed as powerful offenses against stingy defenses.

The defense won out in a game that was played in a steady misty rain.

“It was a good win,” said Cassopolis coach Dan Purlee. “We knew they were going to be legit. Our kids responded. We saw some things on film we are going to have to clean up, but mistakes happen when you play in conditions like that.”

After a scoreless opening quarter, Hunt-Thompson capped off a Cassopolis drive with a one-yard touchdown run.

After a series of penalties on the ensuing extra point kick, a slippery ball may have announced for the Ranger misfire.

Cassopolis scored again before the first half ended as J.J. Hart finished a short drive with a six-yard run.

Hunt-Thompson scored the 2-point conversion to give the Rangers a 14-0 lead heading into the locker room at halftime.

The two teams played nearly the entire second half between the two 30 yard lines.

However, after Centreville drove deep into Ranger territory only to fumble away the football, Cassopolis drove down the field and capped the drive with a 24-yard run around the right end by Hunt-Thompson, who finished with 88 yards on 12 carries.

Hart finished with 67 yards on nine carries as the Rangers finished the night with 206 yards of total offense.

The Cassopolis defense, which came into the game giving up just 24 points the entire year, pitched another shutout as it limited the Bulldogs to 152 yards of total offense.

Gage Collins led the Rangers with 12 tackles, while Ahsan Hart and Skyler McKee both finished with 10 tackles.

Hunt-Thompson had seven tackles, as did Hunter Parsons, who also recovered a fumble.