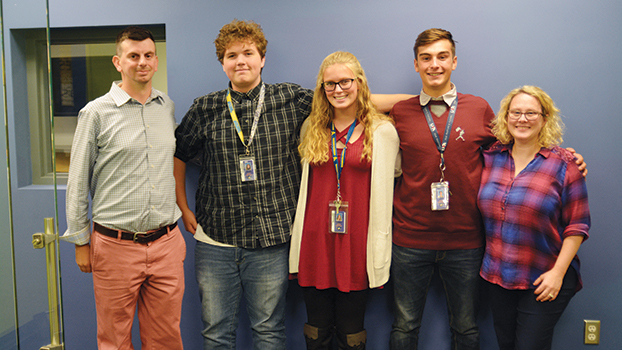 NILES — While they might not be able to cast their votes at the polls just yet, local youth have an important voice when it comes to politics.

Across the nation, young people have collectively been getting involved, calling on their legislators to act on important issues. In Kansas and Vermont, teenagers even campaigned this year to run for governor.

Here in Niles, more than 60 teens from Niles New Tech are also making a mark, as they prepare to host Power in Politics: Candidate Forum.

The forum will take place from 5 to 7 p.m. Friday at the Niles District Library. Participating candidates will include state representative hopefuls for the 78th District, Republican Brad Paquette and Democrat Dean Hill, and the candidates vying for the state senate seat in the 21st District, Democrat Ian Haight and Republican Kim LaSata. The event is free and open to the public.

Niles New Tech sophomores Cade Vota, Devin Hoover and Annabelle Scally encouraged their community to attend and ask politicians to answer their questions. Those who participate will have the opportunity to submit their questions. Students will then select questions to ask the candidates.

Hosting the forum is part of a civics project that has tasked Niles New Tech learners with researching their candidates in addition to hosting the event. On Friday, students will speak on a few issues and help to fact check candidate answers and post regular updates to social media. If they get candidate permission, the debate could also be live-streamed on the Niles New Tech Facebook page.

Vota said the goal was also to benefit residents.

“We really want to educate people on the political views of the candidates,” Vota said. “We are trying to get as many people that we can in the community involved to fulfill their civic duties.”

The students also said they see the forum as a more engaging way to help residents learn about the issues at the forefront of this election.

“It’s a lot better than sitting at your computer reading about people, rather than listening,” Vota said. “We want to build that connection between seeing and hearing [the information], rather than just reading it.”

For his part, Hoover said he hopes it encourages youth and adults alike to be more informed.

“A lot of people don’t really know how politics work,” Hoover said. “There’s a lot of young people in our community and if we can get them involved, it can hopefully help to get them [to take part].”

In a time when political issues have inevitably polarized the nation, students are hoping that the candidate forum encourages people to set aside their bias and listen to the facts. Scally said she will be speaking about civility during the forum, while Vota will make opening remarks.

This election season, the students said they feel some of the most important topics are education and gun control. Vota, Hoover and Scally said they hope to learn more about candidates’ solutions on these issues.

Niles New Tech teachers Kristin Adams-Bondy and Nicholas Hawley said it has been rewarding to watch students learn throughout the project.

“The national media often shows politicians at each other’s throat all the time, but looking at local candidates it seems to really have opened their minds to the idea that most, especially at the local level, politicians are people who care about their community,” Adams-Bondy said. While she said past projects have involved students in analyzing local elections, this is the first time that students have hosted a debate of their own.

So far, learners involved said the project has helped to change their perspective on politics.

“I have never personally been involved in politics,” Vota said. “On the internet, it’s people throwing jabs at each other. Now I see there is a lot more to politics.”

Adams-Bondy and Hawley said they hope the project prepares students to become informed voters, by teaching them how to get involved in local issues and also preparing them for the polls. Tackling the basics, like how to read a ballot, were also an important part of this project. More than anything, the project has also sought to remind learners that no matter how young they are, they still have a voice.

“We are going to dig into different ballot proposals, so they see the different ways that citizens have a stake in how their communities and their country look,” Adams-Bondy said.