Brandywine inducts first wave of athletes into hall of fame 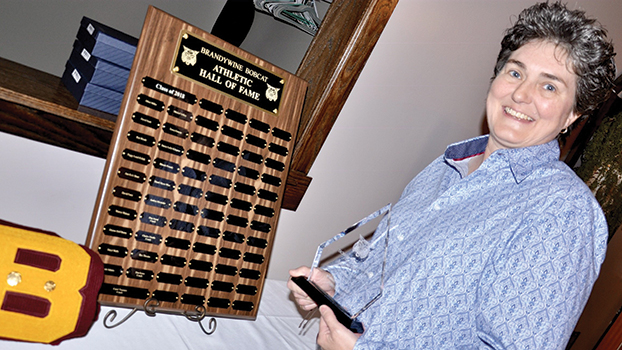 Rhonda Roundy, a first-time Brandywine Hall of Fame inductee, smiles near a plaque recognizing her athletic accomplishments. Roundy is a 1985 graduate. She was one of 18 to be inducted during the Brandywine homecoming game Oct. 5. (Leader photo/KELSEY HAMMON)

NILES — When the Brandywine Bobcats celebrated their homecoming victory against South County High School earlier this month, they also celebrated a milestone accomplishment: the inaugural induction of 18 athletes into the Brandywine Athletic Hall of Fame.

This year’s homecoming game kicked off the Brandywine Athletic Hall of Fame’s efforts to recognize legendary Bobcats. First-time inductees included a select number of athletes who played for the school from the 1960s to 1980s.

To recognize their efforts and commemorate the occasion, inductees were invited to the homecoming game Oct. 5 and their names were read aloud during half time. They also received an award. The celebration continued with a dinner and ceremony at Fifty5, which drew more than 100 people to participate. Fourteen of the 18 inductees were able to attend.

The Brandywine Hall of Fame was initiated by the Brandywine Community Schools Development Board, a board formed under the auspices of the nonprofit, the Brandywine Community Schools Foundation. Their goal was to recognize alumni and help them reconnect with their Bobcat roots. Inaugural inductees were selected by the Hall of Fame committee, who pored through school records to find athletes who made a difference in the school’s sports legacy.

Rod Runyan, president of the development board, said it was heartwarming to see inductees recognized. A number of the inductees traveled from out of state to be part of the first-time event.

“Across the board, everyone was very humbled of that recognition,” Runyan said. “We had a great time. The whole thing went off very well.”

It also did not hurt, Runyan said, that the inductees got to see a Bobcats defeat South County High School by a score of 58 to zero.

The Brandywine Hall of Fame is a series of efforts, prompted by the committee’s board, to keep alumni involved in their school district. Runyan said the board hopes to eventually have a physical hall of fame to induct members into. He said this part of the process is still under negotiation with the high school.

Going forward, Runyan said they will induct athletes to the Brandywine Hall of Fame each year at homecoming. Next year, Brandywine alumni will get the chance to be part of the process by helping to select deserving athletes to be inducted. The board is asking for nominations from alumni, current and former teachers, and administration. They can request a nomination form by emailing: Catshof@brandywinebobcats.org.

After they receive nominations, Runyan said a Hall of Fame Committee and those already inducted will vote on the next selection of athletes to join the Brandywine Hall of Fame. Each year, the board intends to induct five men, five women and one coach.

Reflecting on this year’s event, Runyan said it was great to instill some Bobcat pride.