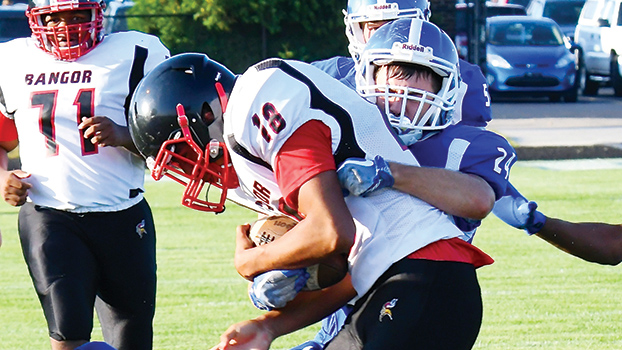 The Cassopolis defense has allowed just 18 points the entire season. The Rangers face a tough test in Centerville on the road Friday night. (Leader photo/File)

CASSOPOLIS — It all boils down to one game for the Southwest 10 Conference football championship.

The No. 9-ranked Rangers will travel to Centreville in a battle of undefeated for the league championship. Kickoff is set for 7 p.m.

Despite having an 8-0 record and outscoring its opponents 427-18, it took nearly the entire season for Cassopolis to earn a spot in the Associated Press Division 7 state rankings.

The Rangers are tied with 7-1 Sandusky for the ninth spot.

The Bulldogs, who are also 8-0 on the season, are an honorable mention selection.

Centreville also has an explosive offense, which has amassed 349 points through the first eight weeks of the season.

The Bulldogs have allowed 32 points on defense.

“They are big and physical with good team speed,” said Cassopolis coach Dan Purlee, whose team is looking to go undefeated for the first time since 2006.

Cassopolis comes into the game in good shape physically. The team has been able to rest some of its starters over the past few weeks against the likes of Muskegon Catholic Central, Marcellus and Hartford.

“We are fortunate to be very healthy,” Purlee said.

Friday night’s game will have a postseason feel to it as both teams will be not only trying to lock up the conference championship, but tune up for the playoffs.

“Big games are always good,” Purlee said. “It will be a playoff atmosphere in Week 9.”

The Rangers routed an old nemesis in Mendon 44-6, while the Bulldogs blew out Hartford 58-8.

Cassopolis’ offense continues to overwhelm its opponents with a wave of runners.

Quarterback Dylan Green has led the charge the past two games, including his 96 yards rushing on nine carries and three touchdowns against the Hornets.

Owen Gardner and Tyrese Hunt-Thompson deliver a one-two running back punch for the Rangers. Hunt-Thompson is also dangerous on special teams.

Against Mendon, Hunt-Thompson returned a punt 88 yards for a touchdown.