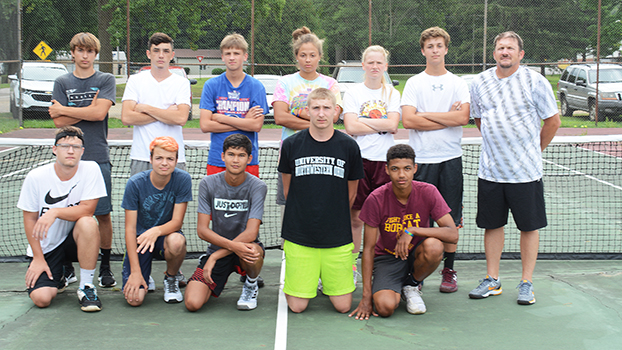 The Brandywine tennis team finished third at the Division 4 regional to qualify for the state finals this weekend at Kalamazoo College. (Leader photo/File)

BERRIEN SPRINGS — The Brandywine tennis team finished third at the Division 4 regional at Berrien Springs last Thursday, which qualified the Bobcats for the state finals.

Host Berrien Springs was the regional champion with 17 points, while Paw Paw was second with 14 and Brandywine third with 13.

The Bobcats had a pair of regional champions and a pair of second-place finishers.

Kevin Conrad was runner-up at No. 2 singles, while Caleb Byrd and Matt Cox finished second at No. 3 doubles.

“I was ecstatic with my team and the effort all around,” said Brandywine coach David Sidenbender. “We had improved results at many fights — 3 doubles (Byrd and Cox) beat a Paw Paw team that beat in straight sets earlier in the year and 3 singles (Miller) defeated a Paw Paw player who beat him earlier in the year. Having four flights making the championship was unbelievable.”

The state finals will be contested this weekend at Kalamazoo College.

“This has been a very successful year all around with an 8-4-1 dual match record, second place in the conference (2 points from winning) and also qualifying for state. After missing state by one point the last two years, this was very satisfying because you never know when and if it will ever happen again. Nothing is a given.”