Chieftains get past South Haven 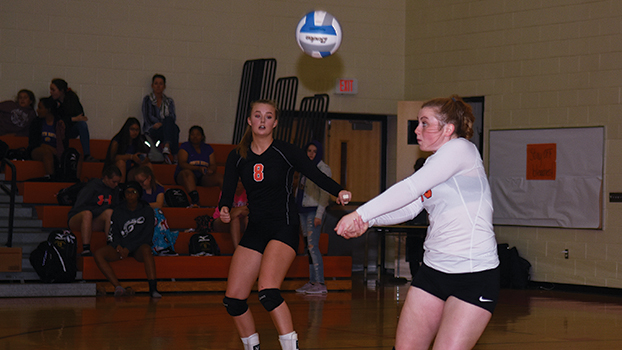 DOWAGIAC — The Dowagiac volleyball team had to wait a bit longer than usual and did not play one of its best matches, but the Chieftains were still able to come away with a Wolvervine Conference victory over South Haven Thurday night.

Due to transportation issues for the Rams, the varsity match at the Dowagiac Middle School did not start until after 7:30 p.m.

The Chieftains are usually on the court and ready to go by about 6:15 p.m.

The win improved the Chieftains to 16-10 overall, but more importantly, at 3-5, it moves Dowagiac within one win of tying the 2007 team for the best league record since joining the Wolverine Conference in 2006.

“It wasn’t pretty, but we got the ‘W’ tonight,” said Dowagiac coach Tony Hooley. “The girls are working hard and getting better. Hopefully we can play more consistently as we draw closer to the end.”

Dowagiac will host Paw Paw Thursday night at the middle school. Play is scheduled to begin at 6:15 p.m.

The Chieftains started the match by playing well defensively in the opening sets, but struggled in sets three and four, just as they had done the previous week against Otsego in a four-set victory.

“We started out play8ing great defense and passing just accurately enough to score the points we needed to take the first two sets,” Hooley said. “Then our ball control went south and our offense couldn’t get on track. Too many errors were committed in sets three and four, but the team never gave up and ultimately pulled out the win.”

Dowagiac had three players with 20 or more digs on defense and four in double digits led by Grace Clark with 30. Amiyah smith finished with 23 and Megan Davis 20. Kelsey Crocker had 14 digs.

At the net, Smith led the team with 10 kills. Crocker finished with nine, Jenna Davis eight and Megan Davis seven.

The Dowagiac soccer team got off to a slow start against Paw Paw and never recovered last Thursday night.

The Chieftains’ match with Paw Paw was postponed from Wednesday due to weather.

Dowagiac gave the host team an own goal in the opening minute and fell 2-0 in a Wolverine Conference match.

The Chieftains outshot Paw Paw 8-3, but could not find the back of the net.

“As you can see we did not start well with an own goal in the first minute,” said Dowagiac coach Mike Williams. “After that we played one of the better games of the year. We moved the ball well and played good in all areas of the field. I feel we are in great shape for districts next week. I am proud of the progress we have made throughout the season and expect us to make a good push in the state tournament.”

Dowagiac will open up Division 3 district competition on the road as it travels to Coloma for a 5 p.m. match.

The winner advances to the semifinals against the winner of the host Berrien Springs-Benton Harbor Countryside match at 5 p.m. Wednesday.

The finals are scheduled for 11 a.m. on Saturday.

The Chieftain golf team failed to qualify for the state finals after finishing 11th at the Division 3 regional at Lake Doster Thursday.

Marshall was the regional champion after shooting 366, while Niles also qualified by finishing second with a 402. Plainwell shot 408 to grab the other qualifying spot.