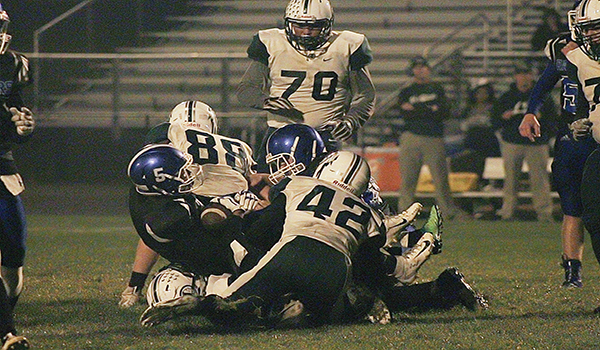 CASSOPOLIS — After qualifying for the MHSAA state tournament last week with a statement 50-0 win over the Marcellus Wildcats, the Cassopolis Rangers welcomed the Hartford Indians to William F. Scott Field on Friday night.

In front of a massive homecoming crowd, the should be Associated Press ranked Rangers treated everyone to a display of offense and defense on Senior Night, defeating the Indians 57-0 and reaching 7-0 for the second year in a row.

J.J. Hart quickly put the Rangers on the board on a three-yard touchdown run to cap a five-play, 49-yard drive.

Hartford’s first drive was the longest for either team during the game.

It didn’t take long to realize the Indians wanted to slow down the potent Rangers’ offense. Starting on their own 35-yard line, Hartford drove 56 yards on 13 plays (11 rushing) before turning the ball over on downs at the Rangers’ nine-yard line.

Senior Tyrese Hunt-Thompson took the next play from scrimmage 91 yards the opposite way and all of the sudden it was 14-0 Cassopolis.

The Rangers capitalized on another Hartford turnover as Hunt-Thompson this time caught a Dylan Green 22-yard pass to increase the lead to 20-0.

A special teams miscue on Hartford’s third possession of the game rewarded Cassopolis.

Hartford attempted a punt facing fourth-and-13 from their own 10-yard line. On the snap, the ball went by the Indians’ punter and in the back of the end zone, resulting in a safety.

Hunt-Thompson scored on a 40-yard run soon after and again on a 26-yard pass from Green later in the second quarter. Cassopolis would lead 36-0 at halftime.

While the Rangers’ offensive display in the first half excited the fans, it was the defense that stepped up multiple times in the second half to put the game away.

Hartford has minus eight yards on offense the entire second half and also fumbled the ball and had an interception.

Skyler McKee recovered the fumble and Brayden Saxton intercepted the pass for the Rangers.

McKee’s recovery came from the running back turned linebacker/offensive lineman Hunter Parsons, when he forced fumble in the third quarter.

Parsons’ made the switch from running back this season as a sacrifice to the team. His contribution on the offensive line is one of the reasons why the Rangers racked up 384 total yards on the night.

On the flip side, he helped hold the Indians to 94 total offensive yards in the game five turnovers in his linebacker position, including the forced fumble.

“I have been playing running back my entire life, so it was a rough change at the beginning,” Parsons said. “I got used to it, and it’s pretty cool.”

“He is making a sacrifice to the team,” said Cassopolis Head Coach Dan Purlee. “He does it with no questions asked and goes out there.”

When speaking about playing on Senior Night, Parsons said he definitely felt that this win was deserved.

“It’s great and amazing,” Parsons said. “We definitely do not get enough respect, and we deserved this win.”

Green, Hart and Cerious Wilsion each had rushing touchdowns of 50, 35, and 10 yards, respectively, in the second half to finish up the scoring for Cassopolis.

“We felt like up front this was going to be one of the more physical teams we will play this season,” Purlee said. “They moved us a little bit in the first half but we were able to control the line of scrimmage and pay more physical in the second half. Our kids have been ready to play every week, there hasn’t been any let downs and they are ready to tune it up every Friday night.”

“Mendon is always a big game, and they get up for us,” Purlee said. “They will be ready to play us ,and we have to ready to execute.”