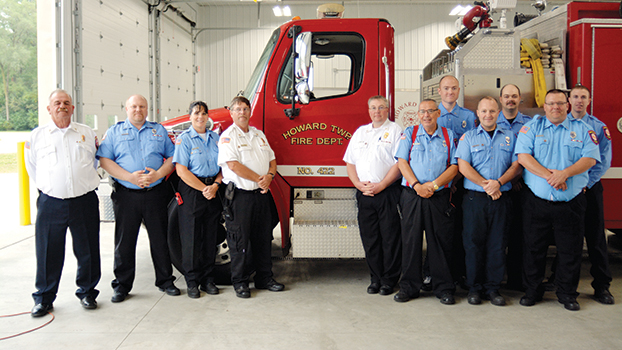 HOWARD TOWNSHIP — Howard Township firefighters celebrated completed construction on a brand-new, approximately $800,000 fire station Saturday. The structure, which will replace a decrepit and outdated fire station, took about a year to build. During an open house, the community was invited to see the results.

About 50 people visited the Howard Township Fire Station, 2681 Detroit Road, to look at the new structure.  Designed in the style of a large pole barn, the station will house all five fire trucks, equipment, as well as spacious conference room and gear lockers. There are 14 firefighters working for Howard Township that will utilize the building.

Howard Township Fire Chief Ed Leneway said he was proud to see the project finally come to fruition. He described how the old station, which was built in 1948, was not up to date and in dire need of a number of repairs.

The former station housed four out of five of the force’s trucks. One truck had to be stored in adjacent pole barn. The vehicles inside the station had to be parked “door to door” to fit. Other equipment, including retardant foam, had to be stored outside or in a meeting room during the winter months.

While space was a major issue, the building was also decrepit.

“You could actually stand inside the station, either to the north or south wall, and look outside because the bricks were coming apart where the floor was sinking,” Leneway said.

Leneway said they attempted to work with several contractors to assess what the cost would be to upgrade the building.

“They [the contractors] wouldn’t even touch it,” Leneway said. “They said, ‘there was nothing to work with’ here.”

To fund a new station, a millage proposal appeared on the 2016 ballot, but it was voted down. In August 2017, Howard Township officials approved a special assessment district which will be levied out on the winter tax bill for five years. The SAD will cover about $500,000 of that cost, with the township expected to pay the rest.

“I felt bad that’s the way they had to do it,” Leneway said. “But we could not operate out of that building anymore. It put the morale way low in a building like that.”

Last month, the old station was torn down to make way for a driveway. Leneway credited a few community businesses, Watson’s Tree Service and Kenneth Smith Inc. for helping to restore the grounds after the demolition process.

Among those who had waited to see the new station come to fruition was longtime firefighter Frank Grahl. Grahl passed away the morning of the open house. To pay homage to him and fellow firefighter, Johnny Rodebush, who died about a month ago, there was a moment of silence during the open house ceremony.

Firefighters also read more than 60 names of firefighters that had served Howard Township and passed away.

Leneway said it was their legacy that paved a trail for today’s firefighters.

“Those people are why we got this station,” Leneway said. “They started this station and throughout the years they kept it going and now it is our turn to hold the torch and keep it going.”