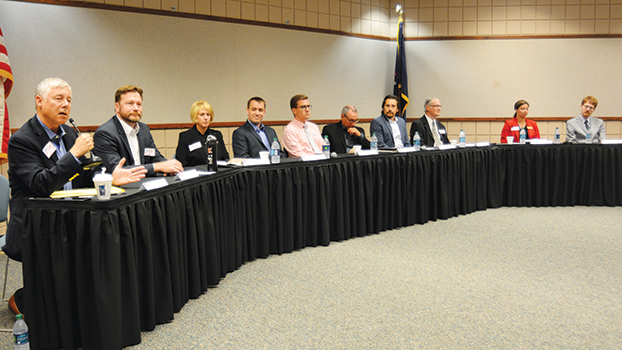 BERRIEN SPRINGS — Ten candidates who made it past the primaries to run for the Mid-Term election expanded on their political priorities, during a Candidate Forum Monday morning at Berrien RESA Administrative Center in Berrien Springs.

The event was hosted by the Berrien and Cass School Boards Association and touched on a spectrum of educational issues from how to protect students from gun violence to how to address teacher shortages. While education appeared to be the primary focus, discussion on items like Medicare were also brought to the forefront.

Representing the Buchanan School District, Kelly Laesch, a Berrien County Sheriff’s Office Deputy and trustee to the Buchanan Community Schools district asked Hill and Paquette how they would create conversation between legislatures and school administrators, especially in regards to creating new rules or addressing issues.

Hill, a Dowagiac teacher of 44 years, said he understands the frustration teachers face when a law is presented to them without much direction.

“I was a teacher for a long time, a lot of rules and things came to us as teachers and it was like, ‘where did this come from? Why do we have to do this?’ I would like to see anyone on an educational group be either a teacher or administrator.”

If they had no background, he said he wished he could assign them to substitute at a school to get some insight.

“So that you can find out that sometimes these rules you are making don’t make any sense,” Hill said. “It’s part of this whole circle of what we have to do. Did they think this through for all the ripples of that law or did they just think as far as Lansing? I would make sure they don’t have a law passed, unless someone had some educational backing.”

Paquette, who also has experience as a teacher, most recently at Niles New Tech for six years, said there was a clear need to get state leaders more involved in interacting with the schools they represent.

“The MDE needs to be completely revamped,” Paquette said. “It should be a network. There is no reason why the first time I met Mr. Hill was in our candidacy. The Michigan Department of Education should be a network, where there is a liaison in every single building and brings people together to talk about best practices, to talk about challenges in their region.”

Paquette said this should be a part of the process before decisions are made.

“Decision makers should be directly in touch with people. They should be empowered all across the state,” he said.

In their closing arguments, candidates were given a final chance to reiterate their views on some of the forum’s issues.

Upton described a brief story in which he told the crowd his favorite ninth grade teacher emphasized that there were good ideas on both sides of the political aisle.

Longjohn said he agreed with Upton, but retorted that it was important for one’s “record should match their rhetoric.”

He continued by re-stating some of his priorities as a candidate.

“I believe we need our school system to be prioritized in funding and a partnership between the federal government and state government,” Longjohn said. “There is a reason why Congressman Upton has earned a ‘C plus’ lifetime rating from the National Education Association. You need an ‘A’ member of congress, protecting education, promoting a lifelong learning agenda. A new generation of leader in D.C.”

When it was her turn to speak, LaSata said she would emphasize a lesson she teaches to her fifth graders.

“Believe none of what you hear, don’t listen to the noise, do your own research [and] find out for your selves,” LaSata said. “It’s easy to say something you want to hear, and I will never do that.”

She said she would fight to make sure children get a good education. She told community members interested to set up a time to meet with her.

Haight also said he agreed with LaSata that research was important. He also said sometimes it was time to set political beliefs aside.

“I think it is important to go up there and make those bipartisan decisions,” Haight said. “Reach across the aisle and get things taken care of, because education should not be a partisan issue.”

Miller kept his closing statement brief. He described himself as “a regular guy” who happens to be serving Michigan Legislature.

“That’s how it has been for three and a half years and that’s how it will always be,” Miller said. “I thank you for having us here again. and it’s a pleasure to be in this race.”

Smith also thanked the audience and reiterated the importance of education.

“Public education is the backbone of a functioning Democracy,” Smith said. “I’m worried that our Democracy is not functioning. I believe that public money: your money, my money, should go toward public education.”

Paquette also said in his closing statement that he wants to hear from his community and invited them to contact him to get a cup of coffee.

Hill said administrators had the power to make a teacher’s day by complimenting them and showing that they are appreciated.

Wendzel said she looks forward to the possibility to work with school administrators.

“Obviously, [education] is very important in all parts of our lives, and I look forward to working with each and every one of you and keeping up on current research, like the school finance research collaborative — I have been doing some research on that,” Wendzel said.

Andrews said he was proud of his NEA endorsement and union groups.

He said today’s teachers are taking on more than a role as educator and are serving as guardians and mental health professionals. He said he wanted to do better by the community’s teachers.