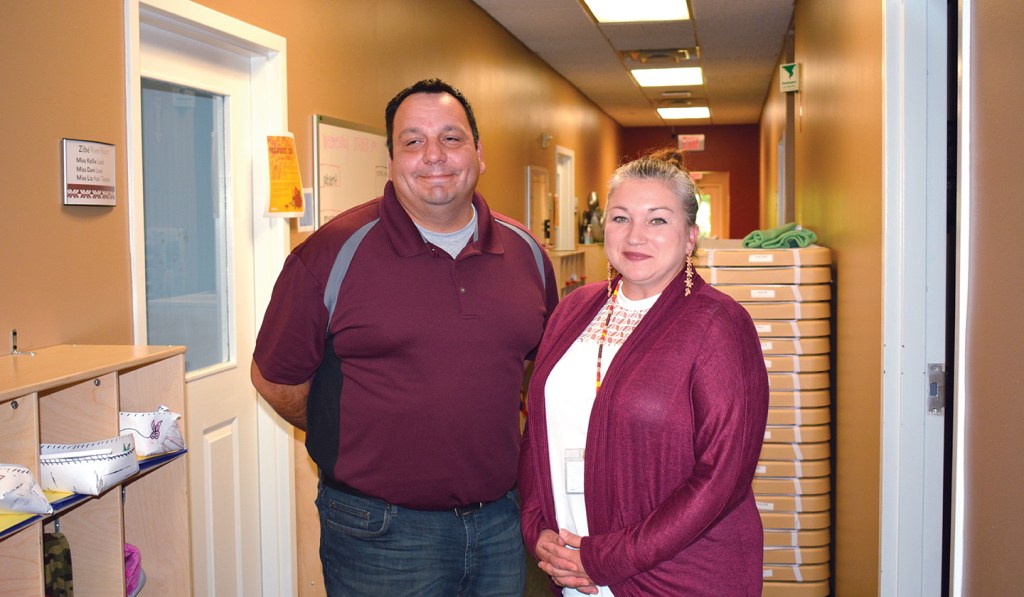 “Ngot, nizh, nswé, nyéw,” she said, counting out her age her using the fingers on her left hand. In her other hand, she, a tribal citizen, held a braid of sweetgrass. “We were told that this makes your body calm.”

Wesaw was counting using her traditional language and using traditional medicine as she and 35 other students have been learning the language and culture of the Pokagon Band of Potawatomi Indians at a newly opened preschool. The Pokagon Band opened the Zagbëgon Academy on Sept. 4. The academy is an alternative preschool for tribal children that is focused on Potawatomi culture, language and lifeways. Currently, the school has 36 students, four teachers and two assistant teachers.

“After 17 years of a very strong program, the Pokagon Band decided to exert its sovereignty and turn to the educational pursuits of its citizens,” said Sam Morseau, director of education for the Pokagon Band. “This gives us a lot more opportunity to utilize our resources, whether it be Pokagon Health Services or social services or our language and culture department, or the department of education and really offer a holistic approach to serving out citizens.”

Morseau said the new preschool will provide children with indigenous ways of learning and support that cannot be found in other public schools.

“The language and culture is huge to students’ cultural identities. That is a huge foundation of academic success,” he said. “This really gives us the chance to address students’ academic needs, cultural needs and socioeconomic needs. We can provide that parental support.”

“When you have a strong cultural identity, you have more confidence,” she said. “Going into an academic setting, you need confidence to be successful. I think that is what this all boils down to. We are increasing their level of confidence in who they are and where they come from.”

“This has been excellent, just excellent,” Rinehart said.

Inspired by Zagbëgon Academy’s success, Morseau said he can see the preschool as a starting point for expanded tribal education. Though there are no timelines or official plans on the table, he said he hopes to one day expand to an elementary school and, perhaps, beyond.

“The possibilities are endless. … There is no limit to where this could lead in the future,” he said. “This is the first step. We will see in a few years how successful this becomes and measure our goals, and based on that, the tribal council may expand [to continuing education].”

However, for the moment, Morseau and Rinehart will continue to focus on Zagbëgon Academy and making it the best preschool possible to ensure the success of its young students, like Wesaw.

“We want to offer the proper resources to our students and families,” Morseau said. “We will work to give them a proper education now, and continue that education even after they [leave Zagbëgon Academy].”