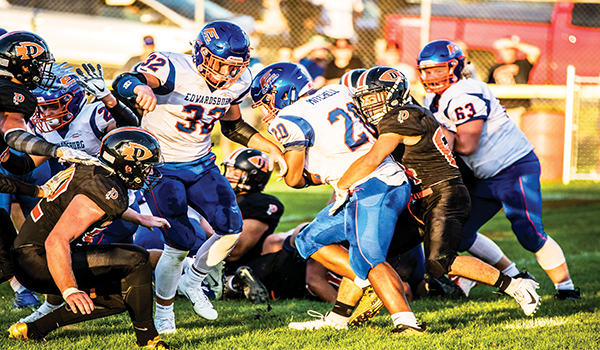 That defense is led by Drew Bidwell and his 33 tackles. Dylan McColley has 26 tackles and Dillon Hursh 20.

Cayden Calhoun and Mac Gaideski both had a pair of interceptions, while seven Eddies have recovered fumbles this season.

Offensively for Edwardsburg, Caden Goggins had 541 yards rushing on 35 carries with 10 touchdowns.

Gaideski is the top receiver with four catches for 104 yards and a pair of touchdowns.

Against Plainwell last Friday night, Edwardsburg scored a pair of first-quarter touchdowns and never looked back in building up a 38-0 halftime advantage.

Goggins rumpled in from 49-yards out for the first touchdown, while Miller scored on a three-yard run.

In the second quarter, Harvey, Mitchell both scored on touchdown runs.

Goggins returned the second-half opening kickoff 56 yards for his third touchdown of the night.

Gaideski and Calhoun concluded the scoring with a touchdown run and a 50-yard interception return respectively.

Nelson led the team with seven tackles. and Cameron Thompson both had six tackles.