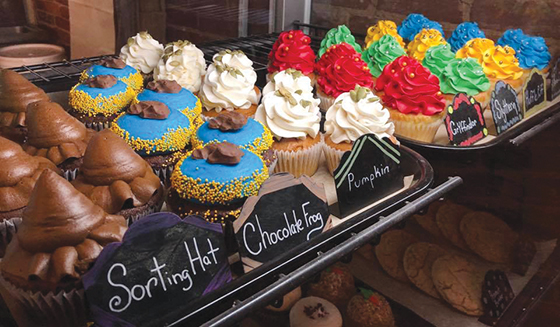 A few of the Harry Potter-themed treats that people can purchase are pictured. (Leader photo/SARAH CULTON) 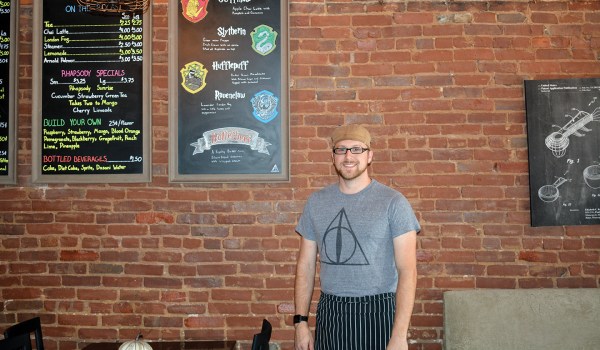 DOWAGIAC — Though Dowagiac’s Baker’s Rhapsody typically deals with ingredients such as cocoa powder and sugar, the bakery and coffee shop on Front Street will be dealing with more magical ingredients to make potions and cast spells during an ongoing promotional event.

The Baker’s Rhapsody is hosting a Wizarding Week through Oct. 13 at its storefront. The promotion, based off of “Harry Potter,” a popular children’s book series, includes a number of specialty treats and drinks, in addition to a giveaway. Every purchase of a specialty Wizarding Week treat allows customers to enter into the giveaway contest, with winners chosen at random. Each of the three contest prizes include a Baker’s Rhapsody gift card, a “Harry Potter” themed mug, a selection of “Harry Potter” books, and other items relating to the wizarding franchise.

“It’s October, and we aren’t quite ready for Halloween yet here, so we wanted to do something that seemed a little fall themed,” said Baker’s Rhapsody owner Jordan Anderson. “All of us here are big ‘Harry Potter’ nerds, so we figured this would be a good introduction to fall.”

Each Wizarding Week treat contains a nod to the “Harry Potter” series. There are four lattes and cupcakes relating to the four houses of the books, Gryffindor, Slytherin, Hufflepuff and Ravenclaw. Additionally, there is a chocolate frog cupcake, a sorting hat cupcake, that is filled with different colored buttercreams to sort customers into a “Harry Potter” house, and several specially decorated cookies.

Having first read the “Harry Potter” series as a child, Anderson said he was inspired to host Wizarding Week, because he knows that the series inspires nostalgia in both himself and others.

“It’s been a cool thing watching the books become this big, nostalgic thing that means so much to so many people,” he said. “The books grew up with us and became this huge adventure that never stopped.”

“It’s fun to bring people in with things like this,” he said. “It’s also just a lot of fun for us.”

Anderson said he hopes the people of Dowagiac — and out of town visitors — will respond well to Wizarding Week and use the theme to open up and learn more about each other.

“It’s been really cool when people come in, because this starts a conversation,” he said. “People are talking about their favorite parts of the book and what house they are in. In a small town, you get to know your customers really well anyways, so when you get to find out you have a shared interest in someone you already know is fun and lets you get to know them better. That’s been fun to see.”