At the peak of apple season, Niles farm offers chance to pick sweet and tart varieties 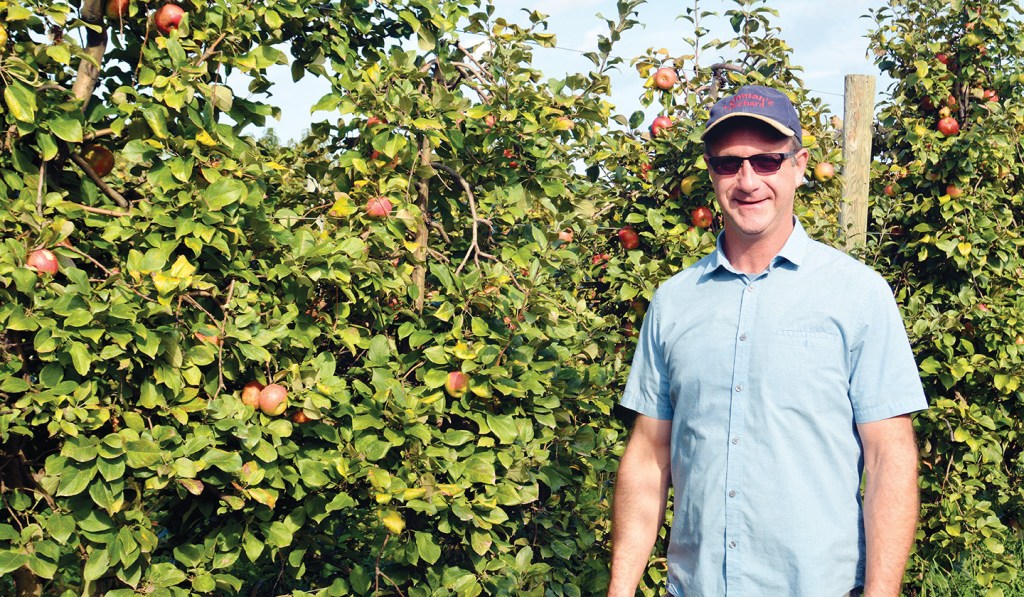 Steve Lecklider, farm manager of Lehman’s Orchard, stood in a row of Honeycrisp apple trees at the Niles farm on Wednesday. The apples are a popular pick among u-pick customers and known for their tart and sweet flavor profile. (Leader photo/KELSEY HAMMON)

NILES — Whether searching for the ideal apple for pies, cider or a crisp and tangy snack, those looking to take part in u-picking at Lehman’s Orchard this apple season will have a wide selection to choose from.

Steve Lecklider, a fourth-generation farmer and manager of the orchard, said all those looking to pick apples at the Niles farm need is to show up with their enthusiasm. Customers are supplied with a bag and picking pail and given free range to pluck from 12 acres of apple trees. More than 60 varieties are grown on the farm. U-pick customers can pick 1 pound of apples for $1.50.

“It’s a fun thing to do,” Lecklider said. “People are out and about and they schedule it in. It kind of solidifies the change in the season.”

Depending on the weather, apple picking has an approximate two-month window that generally starts in September and can potentially last through early November. Lecklider said he believes giving people the opportunity to pick their own produce can give them a sense of appreciation and serve as an educational experience about the farm process.

While the Honeycrisp is the farm’s flagship apple, people who pick at the orchard can also find late season varieties like the Macoun (a variety of McIntosh), Gold Rush and Empire apples. To find the best apples, Lecklider advised that u-pickers take the path less traveled.

“With the u-pick especially [they should] make sure they travel far enough down the row so that they have more of a fresh picking,” Lecklider said. “A lot of the plants or trees right next to the road are already picked repeatedly. You want to get out into the orchard a little and explore.”

For those collecting apples for pies, Lecklider recommended picking several varieties of apples to add a robust flavor.

Apple season at Lehman’s influences a number of customers across the Michigan and state of Indiana alike to pick apples in Niles. For the past two weekends, Lecklider said there have been approximately 130 cars at the orchard on Saturday and Sunday. Though, Lecklider said when it comes to their busiest season, tart cherry picking in July still brings out the biggest crowds.

Those who visit the orchard can also find a Farm Market, where a host of apple products can be found, including apple butter made from Ida Red apples, cider, as well as wine and beer. Already picked apples are also available to those who do not have time to hand pick their own fruit.

Lecklider’s great-grandfather and grandfather were farmers. In 1929, Ralph Lehman, Lecklider’s grandfather, traded a farm in northern Indiana for the Niles farm. Ralph was a Niles school teacher and supplemented his income in the summer selling tart cherries. Lehman’s Orchard has since grown and is now comprised of 61 acres, where peaches, pears, strawberries and blackberries are also grown, to name just a few.

Lecklider has continued to expand his family’s legacy. In addition to continuing operations at the orchard, he opened Lehman’s Orchard Brewery and Farmhouse last year. It is here where Lecklider utilizes a variety of farm produce to make beer, wine and hard ciders.

Lehman’s Orchard is open noon to 5 p.m. Sunday to Friday and 9 a.m. to 5 p.m. Saturday. The orchard is located at 2280 Portage Road. To learn more about the business, visit lehmansorchard.com.