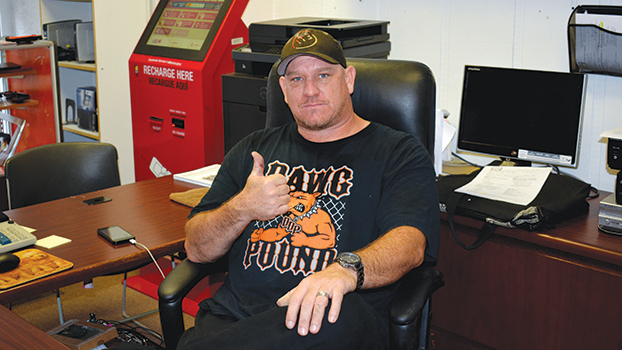 Brian Antisdel poses for a photo. He recently arrived back in Dowagiac after three weeks in North Carolina aiding in Hurricane Florence relief. (Leader photo/SARAH CULTON)

DOWAGIAC — Sitting in a desk chair that had become foreign to him after weeks of absence, Dowagiac resident Brian Antisdel said he didn’t expect that he would cry, but he had to wipe a few stray tears from his eyes anyway.

“I haven’t really talked about this yet with anyone,” he said, swallowing back a wave of emotion. “Where I’ve been and the things that I have seen this past few weeks are powerful and really change the way you see the world. … This is hardest mission since Standing Rock that I’ve done. I’ve never had to truly rescue people before. I had to really get dirty. I had to dig in deeper than I have ever had to in my life.”

Owner of IT3 Computer Solutions, LLC Antisdel arrived back home in Dowagiac Sunday after three weeks in North Carolina aiding victims of Hurricane Florence. During his time in North Carolina and the border of South Carolina, Antsidel said he took part in numerous rescue missions with teams from all over the United States and delivered supplies to victims of the storm.

Despite saying there were times he feared for his own life due to flooding and flowing waters, Antisdel said he kept going because he knew there were people who needed help and were counting on him.

“I know what it is like to have nothing,” he said. “If we can help people or make them smile, that is something. … There is something instilled in me, from my heart, that makes me want to help people. There is no better feeling than giving help.”

Antisdel documented the work he and relief crews were doing on social media, with one of his posted videos receiving tens of thousands of views.

“I did that so that people back home could see what was happening and what the situation was,” he said. “I also wanted to show people that there was still good in the world and people willing to help others, just regular, normal people who can do this. People like you and me.”

Prior to leaving for North Carolina, Antisdel — with only three days’ notice — made a plea to the community for donations to bring to the people of North Carolina. Within the time frame, hundreds of pounds of donations from Dowagiac and the greater Michiana region came in.

Antisdel said he never had any doubt that the people of Dowagiac would deliver. Not only has the community stepped up for past missions Antisdel has taken part in during Hurricane Katrina, Hurricane Harvey and Hurricane Maria, but having been homeless in his teen years, Antisdel said he has experienced the kindness and generosity of Dowagiac first hand.

“Back then, all these glorious people let me come in to eat or let me stay the night. … I know that I could go outside right now and ask for help and I would receive it,” Antisdel said. “I have always said that Dowagiac is not a group of people, but a town of greatness. This is the most giving city I have been to in my life. I love this town. … I want to prove that to people who say negative things [about Dowagiac] that we can do great things.”

Currently, Antsidel is considering heading back to help with relief work this Friday, as his help was requested. Whether or not he is able to go back, he said he will continue to help those in need and make Dowagiac proud.

“I do whatever the Lord puts in front of me,” Antsidel said. “I do this for my city.”