No. 8 Fighting Irish rout No. 7 Stanford 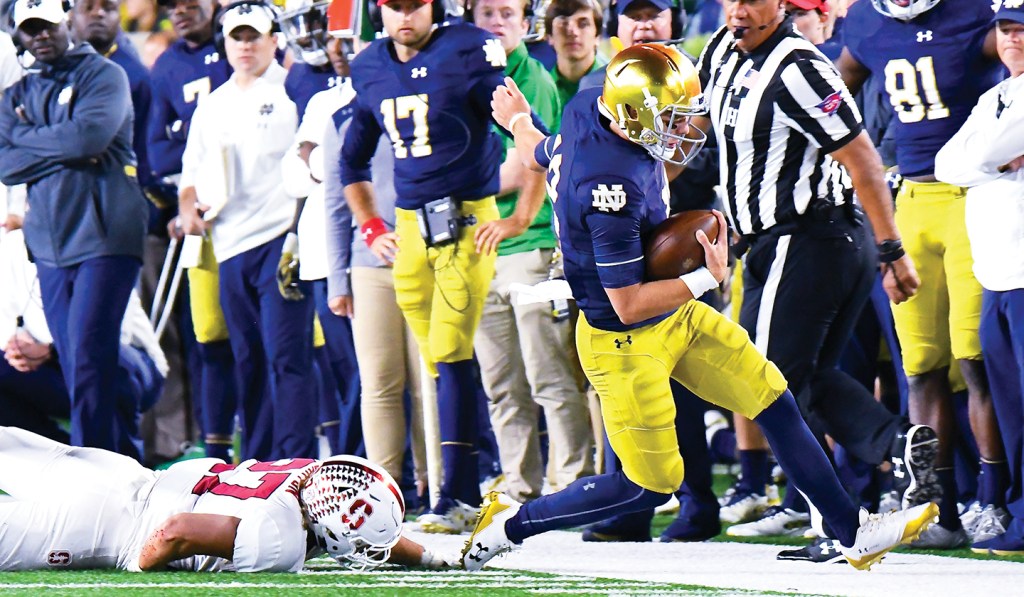 Notre Dame quarterback Ian Book gets out of bounds after a short game against Stanford Saturday. The Fighting Irish defeated the Cardinal 38-17. (Leader photo/KELLY SWEENEY)

NOTRE DAME — For the first time since 2014, the Legends Trophy is coming back to Notre Dame.

Running Back Dexter Williams returned to the starting lineup, the Fighting Irish defense stood strong and Ian Book solidified is starting position at quarterback as eighth-ranked Notre Dame defeated the visiting seventh-ranked Stanford Cardinal 38-17 in front of 77,662 at Notre Dame Stadium on Saturday.

Both teams were unsuccessful on their first drives of the game.

During Notre Dame’s second drive, Williams found a hole on second-and-11 on the Cardinal 45-yard line and opened the scoring.

It was Williams’ first carry and touchdown on the season.

Stanford answered three and a half minutes later as Heisman Trophy hopeful Bryce Love would get in on the action on a 39-yard rush. That would be his longest of the day.

“That was a structural mistake on our part,” said Notre Dame Head Coach Brian Kelly. “It was only one we had all day.  He is the type of back that needs to have two players on him when he hits the ground.”

On the following Notre Dame possession, Book led a 77-yard drive and tapped it off with a six-yard pass to graduate student Nic Weishar.

The Fighting Irish would lead 14-7 heading into the second quarter.

Stanford answered on its next possession as quarterback K.J. Costello found J.J. Arcega-Whiteside on a touch pass from four yards out. Arcega-Whiteside was able to wrestle the ball from Notre Dame defensive back Julian Love in the end zone.

Neither team was able to generate much offense on the next four combined possessions until the Fighting Irish were able to take the lead heading into halftime.

Book found a different target this time in Chase Claypool from 10 yards out.

At the half, Notre Dame held a 307-197 yard advantage in total offense.

The second half was all about the Notre Dame defense as Stanford was allowed 32 yards of total offense.

Julian Love inked his name in the Notre Dame school record books with his 33rd pass break up of his career in the third quarter.

Jerry Tillery sacked Costello four times, which tied a school record. He was given the game ball.

Te’von Coney intercepted his first pass in the Blue and Gold in the fourth quarter that set up the final score of the game.

Notre Dame would hit the 200-yard rushing mark midway through the third quarter and total 272 for the game.

Williams finished with 161 of those yards.

Miles Boykin was the first Fighting Irish wide receiver since Michael Floyd in 2011 to have double digit receptions. He would finish with 144 yards receiving on 11 receptions and one touchdown.

“This was our most complete game to this point,” Kelly said. “We obviously still have things to work on, but it is important to be able to run the ball effectively against top 10 teams.”