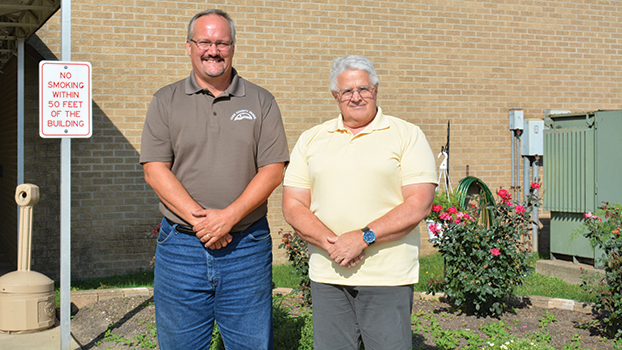 Parks Director Scott Wyman and board member Robert Parrish pose for a photo. The two have been working on a project to have Dr. T.K. Lawless Park designated a Dark Sky site. (Leader photo/SARAH CULTON)

CASS COUNTY — Edwardsburg resident Robert Parrish has loved the night sky for as long as he can remember.

When he was young, his father would take him, under the cover of a clear night, to gaze at the stars, tracing the lines of Orion and the Big Dipper with his finger.

“I’ve always been interested in the stars, ever since I was a little kid. When I was 7 years old, Santa brought me a cheap, toy telescope,” said Parrish, a member of the Cass County Parks Board. “I had everything you could think of in my bedroom. I had space themed curtains on the windows, news clippings on the walls about the space race. I would always watch the launches and keep track of things. My dad and I would sit out at night and look at the stars. Half the time, we didn’t even know what we were looking at, but it sure was fun.”

Parrish’s love of the stars has followed him into his adulthood. Not only does he still gaze at the stars, now through a much more advanced telescope, he is at the forefront of a movement to preserve the night skies in Cass County for generations to come.

“We are always looking for new ways to bring people to our parks, be it fishing or biking or our trails,” said Parks Director Scott Wyman, who has been working with Parrish on the project. “This is just one more thing to add to our parks. We want to add stargazing to our list of attractions.”

What is a Dark Sky site?

The International Dark-Sky Association is the recognized authority on light pollution and is the leading organization combating light pollution worldwide, according to its website. The association provides parks, communities and places with Dark Sky designations to applicants that fulfill the required criteria, which includes achieving dark sky friendly lighting, advocating for the protection of the night sky, having appropriate light readings and more.

“The wider conservation community is increasingly recognizing the preservation of dark night conditions as critical to maintaining healthy and well-functioning ecosystems.” Dalton said. “Until recently, light pollution was largely a niche concern held within the astronomical community.”

Several studies, including one titled, “The Dark Side of Light: A Transdisciplinary Research Agenda for Light Pollution Policy” published in Ecology and Society in 2010, have chronicled the negative effects of light pollution and its many forms, including glare, sky glow, light trespass and clutter. According to the Ecology and Society article, light pollution can have physical effects on both humans and animals, including loss of sleep, hormone imbalance and loss of biodiversity, among other numerous consequences.

“The best way to display is shaded and facing downward, and we aren’t currently doing that,” Wyman said. “We want to start using light the best way we can.”

The journey to have a Cass County park designated a Dark Sky park began about a year and a half ago, after Parrish, who has been called “The driving force” behind the project by Wyman, brought the idea before the parks board.

Wyman said T.K. Lawless Park, a 900-acre park west of Jones, Michigan, was chosen as the spot to try for a Dark Sky site, as the park has naturally occurring dark skies and open viewing for star gazing.

“We knew that it was a great place to look for stars, because the Michiana Astronomical Society has their annual fundraising event at Lawless Park, out of all the places they could choose,” Wyman said. “We found out that we qualify [for a Dark Sky Site] through taking light readings, and we wouldn’t be pushing this so hard if we didn’t qualify.”

So far, the parks department has made progress on its application by gaining letters of support from the Cass County Board of Commissioners, Congressman Fred Upton and State Sen. John Proos. However, the process is still far from complete, and the county may face more challenges on the road to becoming a recognized Dark Sky site.

“When considering dark-sky places with smaller scopes, the most pressing issue we usually come across is lack of staff capacity,” Dalton said. “Without passionate and high-capacity staff, it’s extremely difficult to become a dark-sky place. To achieve designation, an applicant must be a leader in Dark Sky preservation, undertake restorative efforts, show they have conducted Dark Sky actions over an extended period of time, and submit an annual report, among other actions. Furthermore, initial dark-sky place applications can be anywhere from 30 to 100-plus pages; it’s undoubtedly a strenuous and multifaceted process.”

Wyman said that the parks department will have three years after their application is approved to reach full compliance. The biggest challenge he said the parks department will face is finding funding to replace all the lights in T.K. Lawless Park to make them Dark Sky compliant. Estimating the project will cost around $5,000, Wyman and Parrish are working with local partners, including Midwest Energy and Communications, to make the dream a reality.

Though he said it will be a challenge, Parrish is confident that the parks department will, one day soon, be able to call T.K. Lawless Park a Dark Sky site.

Looking toward the future

Once T.K. Lawless Park becomes a Dark Sky Park, Wyman and Parrish have big plans for the area.

In addition to anticipating increased revenue from more visits to the park, the pair is hoping to also host afterhours events in the park to celebrate the unpolluted night sky. Parrish even hopes that one day, many years in the future, Cass County will be able to open a conservatory in the park.

However, the more immediate work will be done to educate Cass County and surrounding areas about Dark Sky sites and light pollution.

“A Dark Sky designation is more than just saying, ‘hey, we have this cool place to look at the stars,’” Wyman said. “It is teaching others about light pollution and how to care for the night sky.”

This advocacy is built right into the Dark Sky program, Dalton said.

“When a [Dark Sky] place is designated, there’s a great opportunity for outreach,” he said. “Unlike many other environmental issues, light pollution is something not everyone has heard of. For example, while Lawless Park is in Cass County, Michigan, we have designated dark sky places worldwide. Dark Sky places give people across the world the opportunity to experience the wonder of the dark night sky, to experience astronomy and to promote awareness of [the issue of light pollution.]”

Dalton also said he believes that though the work at Lawless park is on a smaller scale, it can influence other communities and people to be more aware of light pollution and how they are contributing to it.

“In the last few years, light pollution and concerns related to such have become much more mainstream. We have seen increased interest across the entirety of the U.S. and internationally,” he said. “I think in the next few years we will be seeing many more [Dark Sky designations].”

Ultimately, Parrish said he wants the people of Cass County to experience the night sky the same way he did as a child, unobstructed by light and full of wonder.

“Once people look up at the stars on a completely clear, dark night, they will understand why we are doing this,” Parrish said. “The sky sells itself.”