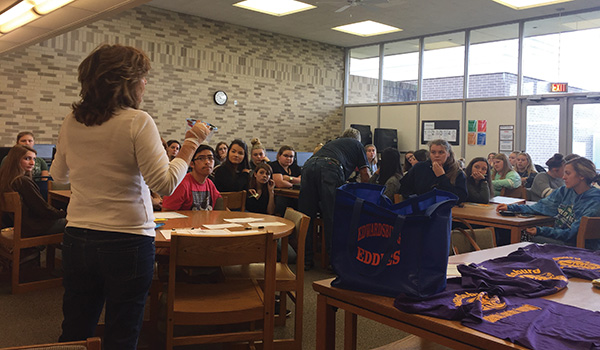 Pictured is Tanda Stiffler leading a Leo Club meeting in the library at Edwardsburg High School. This was the first meeting of the school year, and Stiffler was very pleased with the large student turnout. (Leader photo/ANDREW MENTOCK

Edwardsburg High School students hurriedly gathered around a table at 2:30 p.m. on Tuesday to sign in for projects at the first Leo Club meeting of the school year. It was somewhat chaotic as the students passed around the sign-up sheets on clipboards.

Some also paid $7 and picked up their purple “Leo” T-Shirt.

Once the room settled down, the students took their seats.

With the library’s grey bricks and large windows surrounding the room full of students, Tanda Stiffler, who helps lead the group along with her husband, Dave, stood up and introduced herself to the new students.

The Leo Club is a youth organization that assists young people as they serve as positive forces in their communities, while helping them develop leaderships skills and connect with their peers. “Leo” is an acronym for leadership, experience and opportunity.

Tanda and Dave Stiffler expect that they have 50 students signed up to receive mobile “Remind 101” alerts on their phones for the club, but that even more than that likely showed up for the first meeting. This is their second year leading the club.

“The Lions Clubs is the sponsoring organization, and actually our daughter, Amy Anderson, started [the Leos at Edwardsburg] but she couldn’t do it anymore because she is a principal at Volinia. So when we took over last year, we thought the Leo Club was going to die out. So we took it over. Actually, with this number that we have, it will be the largest Leo Club in the state of Michigan again.”

After she was done briefly talking about the group, she gave students running for Leo Club officer positions a chance to speak.

One student said that they received more than 40 hours of community service last year. Another talked about how excited he was that so many people showed up, and how that means they will be able to do so much more to benefit the community.

Tanda Stiffler said that last year, the club participated in 19 different community-assisting projects. She often partners the Leos with the Edwardsburg Knights of Columbus at Our Lady of the Lake Catholic Church.

The club is already off to a strong start in its goal of giving back to the community. At the most recent Edwardsburg High School home football game, the Leos hosted a food drive where it collected 99 items of food and 857.05 in monetary donations. Proceeds went to the Edwardsburg Food Pantry.

In order for a student to officially be a Leo, they need to have at least six hours of community service with the club.

“I don’t want them to come in and sign up and say, ‘I’m a Leo’ and then put it on their applications for scholarship and they’ve never done anything,” Tanda Stiffler said. “So we say you have to do six community service hours to get a pin. We make a big deal out of the pinning, too.”

The pinning ceremony was hosted at the Edwardsburg American Legion last year. However, Dave Stiffler said that with so many Leos participating, they might have to find a bigger venue this school year.

Next at the meeting Tanda Stiffler gave a brief rundown of some of the events and charities that they were going to assist in the upcoming weeks. One of which is Leader Dog, an organization supported by the Lions Club that provides the blind with service dogs.

“It’s in Rochester, Michigan. Anyone can raise a Leader Dog, then after they [get to a certain age], they go to Leader Dog, which will find a partner that takes that dog because they need help. They’re a service dog, so they go everywhere they go: out to dinner, restaurants, stores, walking. They go everywhere.”

Once the meeting ended, the students stood up and filed out of the room as fast as they could without running.

“You have to be two steps ahead of these kids because you can’t have it be boring,” Tanda Stiffler said. “You’ve got to have something planned for them at all times. Even when we go to other Lions clubs to talk about how to start a Leo Club, I don’t want to sugar coat it. I want to tell them if they’re an advisor, you do have to be prepared.”