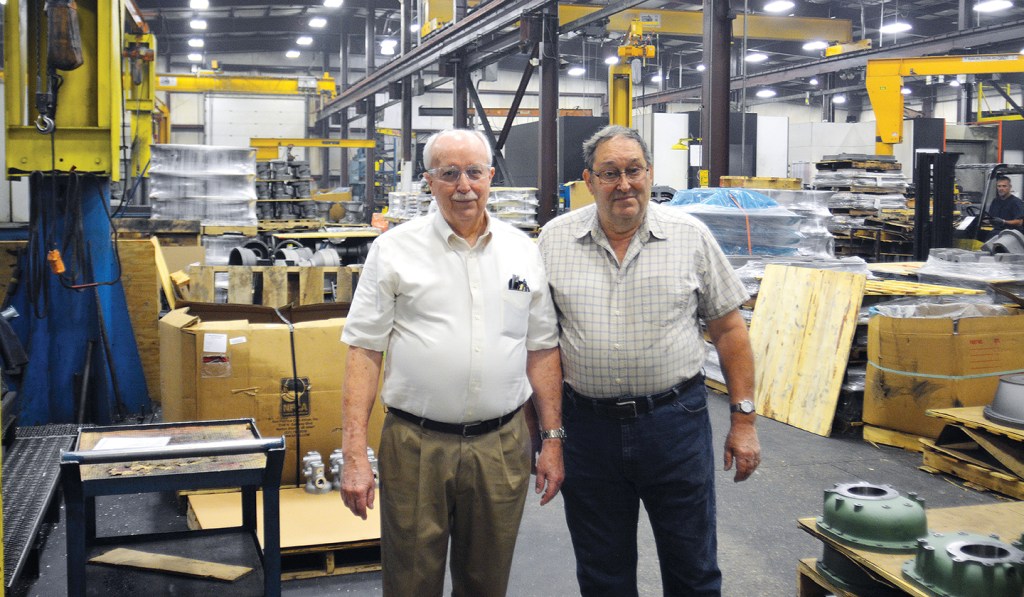 Wannis Parris, the president of Delta Machining, and Bill Robison, vice president, are pictured on the factory floor. The business celebrates 40 years of operation this year. (Leader photo/KELSEY HAMMON)

NILES — Traveling east along U.S. 12, it is easy to fly right by Delta Machining, Inc.

Tucked along Reum Road, Vice President Bill Robison acknowledges that the business is not the most visible to passing traffic.

But the business, which started with humble Niles roots in 1978, is well-known in the manufacturing world and the company creates a number of parts for the air compressor and refrigeration industries. Those parts are utilized to create industrial-sized machines all over the world.

This year, the company will celebrate 40 years of operation. Both Robison and company President Wannis Parris, the company’s founding members, have grown Delta Machining Inc., from five employees to about 81 employees.

Robison, Parris and a third partner, Barry Freeman, started the business. Freeman sold out his part of the partnership early in the operation, but continued to work for Delta for 10 years before pursuing another opportunity.

Looking back on all they have accomplished, Parris said he was proud to reach the company’s 40th anniversary.

“That’s what we have worked so many years at,” Parris said. “It’s been small steps [to achieve] that growth. It’s not like we overnight changed.”

Parris grew up on a farm in Alabama and moved to Niles in his early 20s to pursue a career with Henco, a machining facility that made aerospace parts. He worked his way up the company ladder and eventually met and hired Robison. When a customer with Henco inspired Robison and Parris to go into business for themselves, the pair decided to take the chance.

For his part, Robison has lived most of his life in Berrien County. He attended school in Benton Harbor and continued his education at Lake Michigan College. He worked for Clark Equipment Company prior to joining Henco. He impressed Robison with his eight-year attendance report from Clark, which showed that he had been late only once throughout his career with the company.

Unlike many businesses that have to seek out customers, Parris said the company’s reputation for quality work and dependable delivery has influenced customers to reach out to Delta Machining. Both Parris and Robison attributed this customer support as a reason that the business has continued to grow.

“The customers that we work for have been good to us,” Robison said. “Our customers come to us and say, ‘can you do more?’”

Another factor in their stability is inevitably their hard-working employees, Parris said. The company leaders cited a number of employees who have worked for the company almost as long as they have. They even have several generations of employees who work for them. Parris’ own three children, Keith, Jeff and Michelle, are also employed with Delta.

“We rely on everybody here to participate and make the company better next year than we were this year,” Parris said.

Since their start, the company has seen an evolution of technology. Parris said when the company was first operating, a number of parts had to be crafted with hand-cranked machines. Today, the company is a leader in the Computer Numerical Control Machining Industry, utilizing efficient and high-tech machines that can create a part, even when the operator steps away for a break.

The company has also influenced local industry growth and several employees who got their start at DMI, branched out to form their own companies, just as Robison and Parris did themselves. Those operations include DSS Valves in Niles and Integratech in South Bend.

“It feels good to be able to see them go out and start a business and make it successful,” he said. “Hopefully we contributed a little knowledge to that.”

For Delta Machining, Inc. growth is expected to continue. In the next three to five years, Parris and Robison said they are working to make an expansion of the company a reality, adding about 20 more employees and creating a larger factory floor. Within the next five to 10 years, they hope to transition the company to be employee-owned, allowing those who work there to have a special stake in the company.

The company is also hoping to continue to inspire young workers to be part of Delta. Currently, students who work full-time can have the company pay for classes to further their education.The company said they also rely on Southwest Michigan College and Lake Michigan College to supply them with skilled workers in the future.

Parris said the support of their employees continues to inspire growth.

“When we have a customer come through our plant, they never leave here without stopping to say, ‘I want to tell you something, you got good people.’” Parris said. “That is a motivator in itself.”