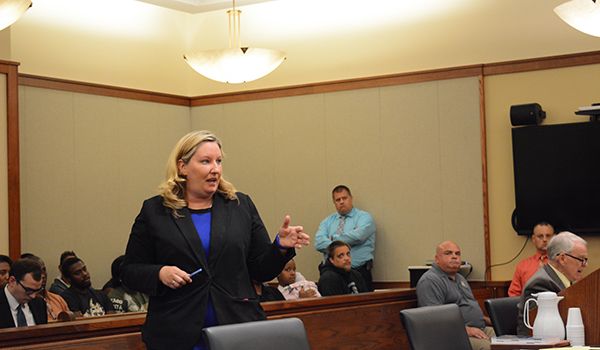 CASSOPOLIS — The case for a man who allegedly shot and killed a man in Dowagiac will be moving to trial.

A preliminary hearing for Rolandis Raisean Russell, 24, of the 200 block of Pokagon Street in Dowagiac, was hosted Friday morning in Cass County District Court. Russell is accused of shooting and killing “Jimmy” Fabian Wesaw, 42, of Dowagiac, on the morning of July 29 on Beeson Street in Dowagiac. Friday’s hearing was hosted to determine probable cause in the charges against Russell, which include the first-degree murder of Wesaw, a charge of assault with intent to murder and multiple firearm charges.

At the hearing, Assistant Prosecutor Tiffiny Vohwinkle argued that there was more than enough evidence to establish probable cause.

To establish probable cause, testimony was heard from officers who investigated the crime and the forensic pathologist who examined Wesaw’s body.

Forensic Pathologist Joyce DeYoung testified that Wesaw’s cause of death was homicide by a gunshot wound that entered through the back of his left shoulder, before travelling through the neck and exiting through his right cheek. DeYoung also confirmed that the wound was consistent with those of a high-powered rifle, such as an AK-47.

Perhaps the most revealing testimony came from witness Jason Rotkowske, a detective with the city of Dowagiac, who interviewed Russell following his arrest. Rotkowske said that Russell told him on tape that he was standing outside The Beeson Street Bar on the morning of the murder when he was asked to leave. Russell said he was then approached by two individuals that he knew, and an argument ensued. Russell then retrieved the AK-47 from his vehicle and attempted to shoot at one of the men, but was unable to fire his weapon as the safety was on. He then fled to a nearby BP gas station, around 120 yards away, while he could still hear the two men yelling and following after him.  Once he was able to disable the safety, Russell told Rotkowske that he took aim at one of the men and began firing. After the initial round of shots, Russell said he saw a man, later determined to be Wesaw, fall to the ground, but Russell did not think that he had shot him. During his interview, Russell told Rotkowske that he thought he had only shot his gun one to three times, despite the 13 shell casings found at the scene.

“I think the most important thing to focus on is the premeditated murder,” Vohwinkle said. “The defendant told the detective that he had the gun in his car, that he and [the intended victim] were arguing and that he could have left, but instead he pointed a gun at [the intended victim] and started pulling the trigger. … He had more than enough time to sit and deliberate before shooting.”

Russell’s attorney Tat Parish disagreed that the evidence presented established probable cause in the first-degree murder charge. Instead, Parish said that Russell acted in self-defense, citing testimony from Rotkowske, which stated that Russell said he was scared of his intended targets.

“[Russell’s] claim has always been that he didn’t shoot on purpose, and there is nothing to show that he aimed at the deceased on purpose,” Parish said. “Anything else he was doing was a matter of self-defense. It seems to me that the first degree [murder charge] should be thrown out, or even second degree.”

Ultimately, presiding Judge Susan Dobrich agreed with Vohwinkle’s argument that there was sufficient evidence to establish probable cause on the charges against Russell, including the charge of first degree murder. Dobrich ruled that the case would move to Cass County Circuit Court.

Following the hearing, Russell was arraigned and pleaded not guilty to the charges against him, meaning his case will move forward to a jury trial.