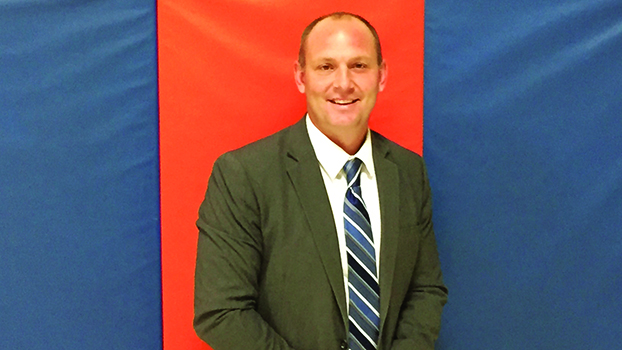 EDWARDSBURG — Walking down the hallway of Edwardsburg Primary School, new principal Jim Cebra is greeted by several kindergarten students who run up to him and hug his leg. Others give him a wide grin, showing their teeth.

“Guess what,” shouts one of the female students. “I got a new tooth.”

“I’ve got two of them,” said another.

“Did you know that when you lose your teeth, they’re going to come back in the same order,” said Cebra to the students.

Once he was done counting teeth, Cebra returned to his office near the front entrance of the school.

“At the middle school and high school, you’ve got kids who are challenging the dress code,” Cebra said. “Then you come here, and after the first few days my legs are hurting from all of the hugs.”

Cebra returned to Edwardsburg Public Schools after a short hiatus from the school district while he got administrative experience as the assistant principal at the South Bend Career Academy.

Previously, he worked for 12 years at Eagle Lake School as a second and third grade teacher. Originally, he was in the looping program there, and in his last few years he worked in the multi-age program.

He got his career started in teaching in the early 2000s in Elkhart Community Schools, where Cebra was born and raised.

“Then an opportunity opened up in Edwardsburg and I threw my hat in,” he said. “I’ve pretty much been here ever since.”

All three of his children attend or recently graduated from the Edwardsburg School District, and his wife is an administrative assistant at Edwardsburg High School.

“I’m very invested in the district,” Cebra said. “All my kids started in kindergarten [in Edwardsburg] and will go all the way through high school. It’s really nice to be employed in the district and bring my kids here. I’ve had a great experience in Edwardsburg as a parent, teacher and now as an administrator.”

His past experience within the district helped prepare him to be a principal today. He said that as a teacher at Eagle Lake, he knew he wanted to be an administrator in Edwardsburg, so he began to “submerge himself” in as many committees and leadership opportunities within the district that he could.

“It’s helped make [coming back] a smoother transition,” Cebra said.” I know the pride and the passion and a lot of the community members. It’s almost like I was never gone.”

He said it’s the fact that he and his family have been a part of the “Eddies” culture for so long made it much easier for parents at Edwardsburg Primary School to accept him.

“Edwardsburg is such a close-knit community committed to its education system that it was very comforting to parents at the open house to hear that I had already been at Eagle Lake for 12 years,” Cebra said. “They were like, ‘oh, you already know our district. This isn’t an outsider coming in that doesn’t know the Edwardsburg way.’”