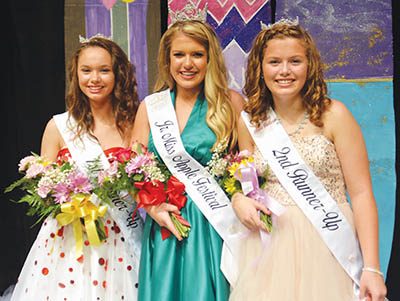 CASSOPOLIS — On Saturday night, Layla True, a ninth grader at Ross Beatty Jr.-Sr. High School, was crowned Junior Miss Apple Festival — an honor she has been preparing for since before she was born.

“I was definitely overwhelmed,” Layla said. “When I was asked what I would like to say right after I was crowned, I, of course, thanked the judges and thanked everyone who supported me and that I’m grateful for the support system that I have behind me.”

This was far from the first Apple Festival title True.

Prior to that, her mother, Kim True, was heavily involved with the pageant and was even coaching girls for Apple Festival when she was pregnant with Layla.

“Regardless of her past involvement with Apple Festival, we would still be elated because it’s such a wonderful experience,” Kim True said. “But given the history and the background of our family’s involvement in it, it’s wonderful for her to know that once you become a part of Apple Festival, you’re a part of that family for the rest of your life.”

In order to prepare for the pageant, Layla practiced her walk and did a few other things, but she said she was ready to be in front of the judges and the crowd as she “is very outgoing.” Layla also said that she did not have to dramatically adjust her schedule because she is used to being busy.

More important to her than the Junior Miss Apple Festival crown is what this accomplishment could do for other girls.

Layla said that the pageant was an opportunity for her to show others how enjoyable and rewarding the Apple Festival can be, which might help increase the number of people who participate in it going forward, particularly girls who do not fit the stereotypical mold of a pageant contestant.

“One of the Miss [Apple Festival] judges contacted me and told me that during the pageant she could hear people behind her talking about the contestants and saying that ‘it’s always the really tiny girls who win and all of that kind of stuff,’” Layla said.

But Layla’s win proved them wrong.

“She said that kind of broke her heart listening to that, one because Layla does have a more mature body for a 13-year-old,” Kim said. “Then the girls behind her were cheering ‘she won, she won.’ As a mom it was a great experience to know that just her winning, she was already motivating younger girls to love themselves and maybe try something that they may have not done because they weren’t sure if they would do well or not.”

Now that Layla is the Junior Miss Apple Festival winner, she hopes to continue to help get community members more involved with the festival. She said she hopes as many people as possible attend Youth Day, which takes places this Saturday. There will be a parade at 1 p.m. from Eastside Park in Niles to the Apple Festival Fairgrounds.

“Youth Day and it’s something the festival does for the youth in the community,” Kim said. “It’s free to them because they want everyone to feel like they can be a part of the festival in one way or another, so they do a small parade from East Side Park to the Apple Festival grounds. They do field games. They do a bike and trike race. They give out free lunch to everyone.”