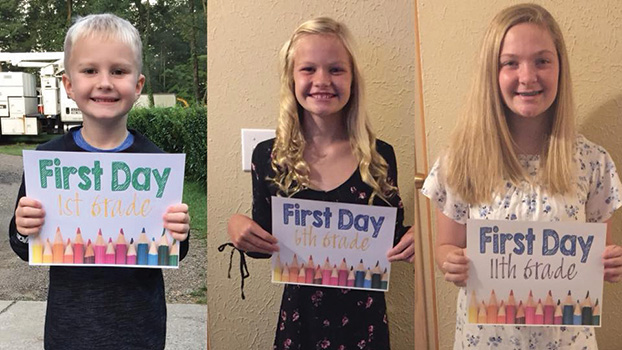 The morning before the first day of school is often filled with nervous jitters and a fluttering feeling of excitement for both students and their parents. Younger children anxiously anticipate what their new teacher is going to be like while older children cannot wait to see their friends.

On Tuesday, students from kindergarten through high school had their first day of school for the 2018-19 school year, and parents in Cass County dealt with a variety of emotions because of it. Some parents had multiple children spanning first grade through high school, while others just had one.

Either way, the first day of school can be hectic, thrilling and, of course, a little stressful.

“We were having lots of emotions because everyone is going to a different school, and then my 16 year old is a junior and she was starting her SMC classes today,” said Jen Brown, who had a first grader, sixth grader and junior in high school have their first day on Tuesday. “So not only starting her junior year, but she’s on half days so she can go to the health academy for her first college class. We had lots of emotions.”

She said her two girls, Carlee and Caitlin, work up early on Tuesday morning to get their hair curled and ready for their first day of school. According to Brown, they were very nervous and excited.

It was also somewhat emotional for Brown who said she cried a little when she dropped them off. On the other hand, her first grader, Braylon, only felt excitement.

“He had the same teacher [as last year], so he was kind of like, ‘I’m good. I’m just going back to the same thing,’” she said. “He was just excited to see his teacher again.”

While most parents are nervous on the first day of school, it can be even tougher when it is their child’s first day in a new environment.

Jamie James has three children in Cassopolis Public Schools. Her youngest, Jenna, is a sixth grader at Sam Adams Elementary School, while her two sons, Jesse and Jimmie, are a freshman and a sophomore at Ross Beatty Jr.-Sr. High School.

“I feel like the babies are growing up, so it makes me feel old,” James said. “I’m nervous for the freshman. It will be a little different to have two kids in high school, but we’re excited.”

At the same time, she said having her older son there is reassuring.

“My oldest is very protective of his younger brother,” she said. “My middle son has autism and he’s epileptic. He is definitely his brother’s keeper.”

One way parents said they were able to ensure a pleasant first day was to drop their kids off early.

“I thought it went really smoothly,” said Kelly Cook, whose daughter, Megan, and son, Brady, had their first day at Edwardsburg Middle School. “We know the first day can be a little hectic, so we left a little early, but they have several people out there patrol to make sure things were running smoothly and everyone go to where they needed to go.”

Another option for parents was to have their children drive them to school.

Rachele Ward, a humanities middle school teacher at Ross Beatty Jr.-Sr. High School, has a twin son and daughter, Aidan and Addison, who both took driver’s training over the summer.

“Addison drove me to school this morning,” Ward said. “That was kind of an interesting change and a different way to start off school year.”

Overall, it seemed like most Cass County parents and their children had a successful first day of school.

“My kids love going to Edwardsburg and they were just so excited to get back,” Brown said. “Even my junior, she had her binders ready for the last three weeks. She was ready to go. She was like, ‘I need my procedures. I need my routine back.’ So she kind of sets the tone for the other two, so my kids really enjoy school and they love going.”