Construction on US-12 may be delayed due to labor dispute 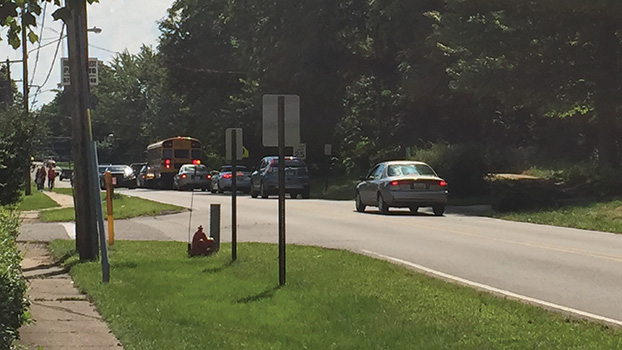 Pictured is traffic on Section Street in Edwardsburg after school let out. Due to a labor dispute, construction on US-12 did not increase normal wait times for parents like they expected it to. (Leader photo/ANDREW MENTOCK)

EDWARDSBURG — In August, Edwardsburg Public Schools sent parents and guardians a letter alerting them that they should expect “significant increases in wait times” for the first week of school due to the road construction on US-12, which began in July.

The letter then went on to inform them how to minimize intrusive traffic jams with a series of tips and suggestions. However, when the first day of school let out on Tuesday, Edwardsburg parents said the traffic was not as they expected. When they went to pick their children up from the middle school, southbound traffic backed up to Barber Street, but only momentarily.

The increased wait times that parents were anxious about and left home early for seemed non-existent. That is because construction on US-12, which was expected to resume after Labor Day Weekend, is being impacted by a labor dispute between the Michigan Infrastructure and Transportation Association and the Operating Engineers Local 324.

“The Edwardsburg project is one of the projects that we were notified by the contractor, Rieth Riley, that may be impacted, but we don’t know what impact, if any, there will be, ” said Nick Schirripa, a communications representative with the Michigan Department of Transportation.

The initial plan was for construction on US-12 to be completed on Oct. 5, and Schirripa said that is still the projected date. As of last Friday, the project was still on schedule, especially after construction was finished on the railroad crossing near M-62.

“Really, all we have left to do now that we’ve finished the railroad crossing reconstruction is to finish repaving the westbound lane of US-12,” he said. “We’re almost there. We’re looking at about another month.”

In a statement, MDOT said that it is not part of the negotiations that led to the labor dispute, and that it hopes the issue is resolved as quickly as possible.

“In the event labor disputes affect active construction projects, MDOT has contractual specifications that address the contractor’s responsibilities,” the department said in its statement regarding the labor dispute. “The contractors are obligated to maintain a safe work zone for motorists at all times and are required to do so for the full duration of the project even during delay caused by a labor dispute.”

On Wednesday morning, representatives from Rieth Riley were unavailable.

“The contracts call for MDOT to grant extensions because of labor disputes, similar to provisions for acts of God,” reads the statement. “If that happens, the contractors could incur costs. Those would not be compensated.”

If and when construction picks up on US-12, Schirripa said that parents and students should not be impacted too much after once school lets out. Construction is expected to begin at 8:30 a.m each morning and end at around 3 p.m. each day. He said there may, however, be a few days when construction will need to continue past 3 p.m.

Until the labor dispute ends, parents can expect a quicker-than-expected trip to Section Street when they go to pick their kids up from school.