Cassopolis High School band looks to build off past success 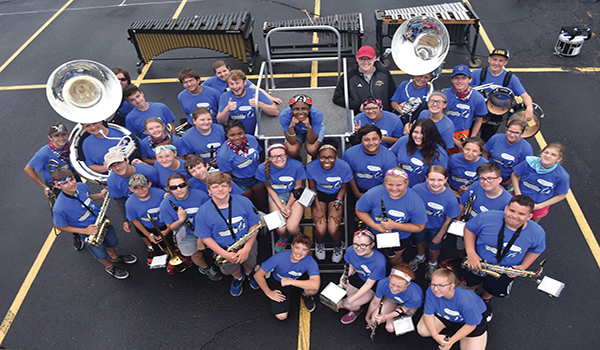 CASSOPOLIS — A high school marching band is comprised of several students playing a series of songs in unison, as they follow a set of choreographed steps. In order to master this — or at least come as close as high school-aged students can — it takes months of step-by-step repetition, with each member learning their role and working to understand how it contributes to the band’s overall performance.

At least, this is the case for Cassopolis High School Band, which began preparing for its football games and other fall performances at the beginning of July, starting with a camp.

“We did a two-week, intensive camp: the first week being only four days and the second week being a total of six days,” said Sean Keck, the Cassopolis Band director. “That was to learn all the music, all of the movements, memorize said music and movements. It is an intensive slog. The kids put a lot of good work in. We’re really proud of them.”

Keck said that throughout this process, it is important to break this process down to make it as simple as possible. During the first week of camp, he had the band focus on learning the music and marching fundamentals. Then, in the second week, he began to gradually add more and more to the students’ workload, until they were able to get through an entire performance.

The band’s first performance in front of the Cassopolis community was last Thursday at the football team’s home opener against Bangor. At each home game, Keck said that he and the band plans to incorporate something new into the band’s routine and do so until the end of the season.

“The band has been growing over the past few years,” he said. “I’m starting my fourth year this fall. Our show theme this year is titled, ‘O Canada.’ It’s a collection of tunes composed and performed by Canadian artists, and the kids are pretty excited about it, as am I.”

Currently, the band is made up of about 40 members playing a handful of instruments, such as trumpets, flutes, trombones, snare drums, bass drums and two new sousaphones that the school recently helped the band purchase.

Once school starts, the band will practice during and outside of school hours. In band class, students typically work on cheers, the school fight song and the “Star Spangled Banner.” Keck said the band is for high school students and Ross Beatty Jr.-Sr. High School eighth graders that have the music and academic aptitude required by the school to participate.

“This year, especially, we have a lot of young students, and it’s always tricky to teach the youngins how to read drill and how to, again, to ascend to a higher level of reading music,” he said. “What comes with that is you end up with a really intensive process that molds these kids into better versions of themselves.”

In addition to playing at home football games, the band will compete in two competitions: the Otsego Invitational at Otsego High School on Sept. 29 and the District Six MSBOA event at Niles High School in the middle of October.

“We’re looking forward to putting on a great and entertaining show,” Keck said. … “Our band has progressively gotten better each year. Last year, we took third place at the Otsego Invitational and best marching. I’m looking forward to improving on those placements again, and seeing how far we can get.”