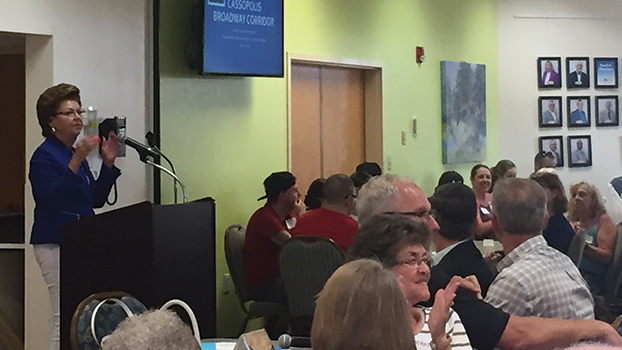 CASSOPOLIS — A plan for the future vision of Cassopolis was solidified on Wednesday, July 11, when a crowd of Cass County residents filed into the Cass County Council on Aging for the final Imagine Cass meeting.

The meeting included a final presentation from Michigan State University Extension employees, Wayne Beyea and Warren Rauhe, who are from the university’s School of Planning, Design and Construction.  The program done through MSU’s Sustainable Built Environment Initiative, which the university started in 2013 to assist local governments and communities with planning and design concerns.

Beyea and Rauhe provided an overview of what the downtown area of Cassopolis 10 to 15 years into the future by implementing several of the revitalization projects. Their vision was based on feedback they received from the community at the previous two meetings.

This included the possibilities of statues throughout Broadway Street, a boardwalk along Stone Lake and an arched entryway that goes over the road to inform people that they are about to enter Cassopolis.

“I think [the meeting] went very well,” Beyea said. “As has been the case at all of the previous two meetings, there’s been a lot of public support throughout this process. While tonight’s was kind of the culmination of it, it really demonstrates their commitment to moving forward because the hard work really begins after tonight’s meeting.”

Around 200 people attended each meeting. Beyea said during his presentation that in the past when worked with other communities on a similar project, they might have around 50 people, and that it is a good sign so many members of the Cassopolis community stayed in gaged throughout the six-month process.

Going forward, however, Beyea and Rauhe will no longer be in charge of carrying the project forward. It will instead be up to members of the community.

“It’s easy to have a level of apathy and say, ‘this is all pie in the sky and never happen,’” Beyea said. “But you know our experience has been when you have a few committed folks that are determined, persistent, can build off of some good information and build consensus, that things do happen.”

In order to help the community facilitate this, Karen Folks, Cass County administrator, announced at the end of the meeting that those who attended can sign up for one of five action groups. These groups will help spearhead various aspects of the plan that was developed during Imagine Cass meetings.

Folks said they asked people to think of who was unable to attend and sign them up for an action group that they could serve well. People who were not signed up will still have a chance to be a part of the next step.

These action groups will be looking at how to obtain funding for several of the projects involved with the Imagine Cass plan, while also deciding what projects to pursue and who should be in group leadership positions.

Toward the end of August the action groups will likely meet, according to Emilie Sarratore, the village manager. This will give the groups time to meet and possibly influence the district’s master plan, which there should be a draft of in September. The master plan will be finalized in December.

“I would say that the Village has been working closely with Michigan State and Wightman, who is the engineering and architecture firm that the village had hired to work on the master plan,” Sarratore said. “So we have a completed and comprehensive plan that’s truly driven by the citizens. While MSU focused on Broadway corridor, the Village has really been taking a look at the neighborhoods, parks, Stone Lake [and more].”

Another aspect of the project is what Folks referred to as “low hanging fruit.,” that is, projects that can be completed efficiently and cheaply to keep but can also quickly improve the look and feel of Cassopolis.

“I think there are definitely a couple of things that can be knocked out of the park quickly, and be a great opportunity to say, ‘hey, look what we accomplished together. This wasn’t so hard. Let’s get started on the next thing,’” Sarratore said. “Because really, we can only move forward one piece at a time. It can’t all be done at once.”

This could be a simple mural project or cleaning up an alleyway that is currently covered with trash and debris.

It’s also worth noting that the MSU will not completely abandon Cassopolis.

“They will be a great resource for us,” Folks said. “I am sure they will always be just a phone call away for us.”

The project facilitators will also provide the town with a final report, as well as all of their PowerPoint presentations. Beyea said that these can be implemented into the village’s master plan.

“My biggest thing and what we’re communicating from our office is to keep the momentum up, stay positive, stay involved, stay informed and stay tuned for what’s next,” Sarratore said. “That’s really what we want people to remember and what we want them to do.”