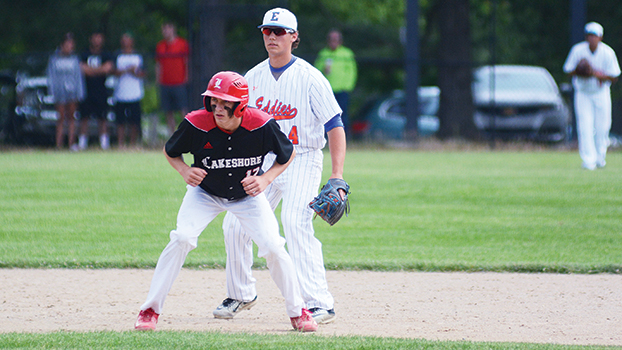 The Lancers defeated No. 4-ranked Orchard Lake St. Mary’s 3-0 in the extra inning affair and will face the winner of the Saginaw Swan Valley-DeWitt semifinal, which was played Thursday afternoon.

With the game still scoreless after nine innings, Lakeshore opened up the 10th inning with a single by Bray Plomb to centerfield.

Cam Dalrymple followed with another single to put runners at first and second with no outs for the Lancers.

A wild pitch advanced Plomb and pinch runner Ryan Soper to second and third before Oli Carmody singled to score Plomb with the game-winning run. Dalrymple and Soper advanced to second and third on the throw to the plate giving the Lancers a chance to break open the contest.

Another wild pitch scored Dalrymple with the second run of the game before Joel Brawley laid down a bunt single to score Carmody with the game’s final run.

Carmody, the Lancers’ third pitcher of the game, gave up a walk in the bottom of the 10th, but Orchard Lake failed to capitalize.

Lakeshore finished with seven hits in the game, all singles.

St. Mary’s also had seven hits, including doubles by Carter Macias, Dillon Kart and Cole Sibley, but could not push a run across the plate.

Carmody picks up the win. Connor Brawley started and worked into the eighth inning before giving way to Logan Morrow.

Anthony Fett took the loss for Orchard Lake in relief of Logan Wood, who pitched into the ninth inning.

DOWAGIAC — Tuesday afternoon, a group of members with the Greater Dowagiac Area Chamber of Commerce gathered in a small... read more