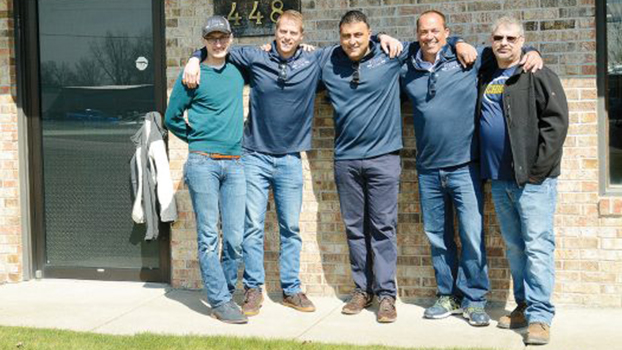 Strides made to start local business

BUCHANAN — Since putting down their roots in Buchanan earlier this year, one medical marijuana growing facility has made significant development while waiting for their state license to process.

Business partners at Redbud Roots said their building at 448 Post Road will be operational Friday, June 8. That means they will be ready to start business, pending approval from the state. In early interviews, the business partners said they hope to begin business this year.

While the Niles Daily Star was not permitted to take pictures while visiting the building Friday, Redbud offered a sneak peek at the inner workings of the facility and the progress that has been made since the Star last wrote about the company in April.

Since then, between 10 to 20 workers per day have been working round the clock to prepare the formerly vacant building in the heart of Buchanan’s industrial area for operation. Where there once had been a wide-open space, there is now a network of rooms, machinery and storage just waiting for medical grade cannabis plants to grow and harvest.

Redbud Roots is comprised of five partners, who each bring a different level of expertise in the industry to the table. The partners include Hunter Mishler, William Haas, David Murray, Chris Fanta and Jim Finley.

Mishler said the progress has made him excited at the potential to get business started soon.

“We get more and more excited every time we are out here,” Mishler said. “It’s something we have all dreamed about for a long time. To have it come to fruition and put our hands on it is exciting. We are all just ready to go.”

The company is licensed to grow 1,500 plants. At this time, Mishler said it is undecided whether the medical marijuana will be grown and processed at their own facility down the road or sold to another business. Redbud Roots also owns two other facilities at 215 and 208 Post Road. Both buildings are licensed for 1,500 plants. The building at 215 is a grow and processing plant and 208 is another grow facility.

The building at 448 contains a room where immature plants will grow, called a “vedroom,” and then be transferred to three flower rooms, where the marijuana will be harvested from mature plants. The three different flower rooms will allow the business to create different strains of medical marijuana, because each strain requires a different climate control.

The business plans to harvest indicia, sativa and CBD strains. The flower rooms and the grow room utilize two-tiered shelving that is movable with the crank of a wheel, allowing the business to maximize space.

Other features inside the building include office spaces, break room, a secure transport area and a decontamination room, where workers coming in from outside can make sure they are clean. There are also numerous security features, including infrared cameras inside and outside of the building and key card access on every door.

Despite the security features, Murray said people should know that many of the immature plants that will be housed in the facility are not valuable because they do not have harvestable flowers.

“In terms of what someone could actually take … I’m more worried about thinking there is something of value here than there really is,” Murray said. “I’m more concerned about our workers and making sure they are in a safe environment.”

In the next week, there will be some additional installation inside the building including fans and lighting, as well as some electrical and flooring aspects.

“It’s a new industry, so I definitely think they have had some learning curves to get through and I respect what they are going through,” Murray said. “It’s a very important and stringent licensing application. I think they are doing their due diligence and it is much needed.”

While recreational marijuana is on the mid-term election ballot in November, the business partners said that no matter what the outcome, they established themselves to serve medical marijuana patients first.

“It’s not even a consideration for us right now,” Mishler said. “We are just focused on getting this project 100 percent the best it can be. We are here to take care of the patients first and foremost.”

DOWAGIAC — A local history museum will conclude its popular lecture series with a look back into one of Dowagiac’s... read more