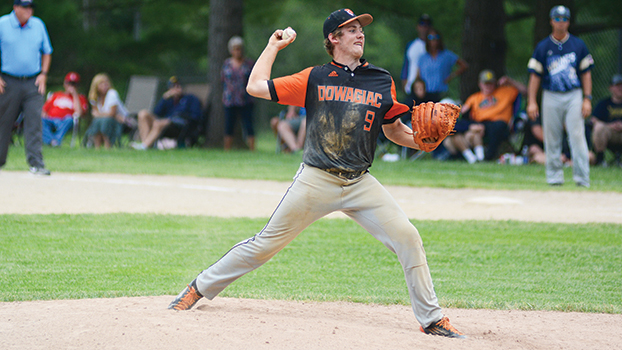 DOWAGIAC — It was not quite the end first-year coach Keith Schreiber wanted for his young Dowagiac baseball team, but he knows that what they accomplished in 2018 may only be a preview of things to come.

The Chieftains, who rattled off 10 straight wins entering the Division 2 state baseball district, upset Niles 1-0 in the semifinals at Rotary Park Saturday afternoon.

Dowagiac came up short of winning a district championship as it fell to defending state champion Lakeshore 12-1 in the title game.

The Lancers are coached by former Dowagiac standout Mark Nate.

Schreiber, his players and his staff can be proud of what the Chieftains accomplished this season. An 11-game winning streak gave Dowagiac it first winning season in a decade.

The Chieftains finish the year 19-16, but are already looking forward to 2019.

“We’re extremely pleased,” Schreiber said following the championship game. “From where this program was heading into this year, we really didn’t know what the expectations were. The only expectations we could have on players was to get better on a daily basis and they kids stayed committed to getting better every day.”

Schreiber had never coached high school baseball until he took over the Dowagiac job last winter.

He played his high school baseball at LaPorte under his father, the late Indiana baseball coaching legend Ken Schreiber.

He also knew a little bit about the Chieftain program as his son Kade is a member of the squad.

Following some of the lessons learned from his father, Schreiber said he would see a change in his team as the season went along.

“We went from a team that I didn’t know if they expected to lose to a team to one that expected to win every time they took the field,” he said. “I give credit to the kids for buying in and working hard. Before I took over I did have the luxury of watching this team play a little bit because my son was playing.

“When I took over the expectation was just trying to come in and establish a culture. I had people tell me that it would take a couple of years, but we were able to do that in one season.”

Part of the reason that he was able to change the culture so fast was the approach.

“We knew we had to do it with hard work and having to outwork other people,” he said. “That’s what we focused on. We never focused on conference championships or anything like that. It was working hard, learning the game and establishing a culture.”

The Chieftains sent a message to the rest of the area in the opening game that their stock is on the rise.

Dowagiac and Niles were locked in a pitcher’s duel for the entire seven innings as senior Brendan Dudley and Vikings’ junior Brayden Lake combined to give up just eight hits.

One of the three hits that Lake gave up came in the top of the seventh when A.J. Kidd singled just inside the third-base bag to score Cody Dorman, who was hit by a pitch to open the inning and moved to second on a balk.

“A.J. plays largely for defensive reasons,” Schreiber said. “We hope he grows into a hitter. But he came through in that situation with the biggest hit of his life so far.”

Schreiber knew he would get a solid pitching performance from his ace.

“That’s the way you draw it up, having your senior ace on the mound,” he said. “He’s been a good pitcher for four years. We knew it would be a low-scoring game. We knew he had to bring his ‘A’ game and he did.”

Lakeshore eliminated No. 1-ranked Edwardsburg 5-2 in the first semifinals at Rotary Park Saturday.

Connor Brawley tossed a five-hitter as he went the distance pitching up the victory.

With the score deadlocked at 2-2, Jared Evans scored on an Edwardsburg throwing error for the go-ahead run in the fourth inning and then added a pair of runs in the fifth.

The Eddies (27-5) had Devin Pulling and Chris Griffin drive in its two runs.

In the championship game, Lakeshore scored eight runs in the first two innings and never looked back.

The big blow was a grand slam by Brawley in the five-run second inning. Brawley finished with four hits.

“It’s never easy,” Nate said. “But it never gets old. The big goal for us is what’s going on now. We went through a lot of adversity, including injuries this year. But we never used that as an excuse. We made good plays today, ran the bases and bunted the ball well.”

The district championship was the first for Nate, both as a player and a coach, at Rotary Park.