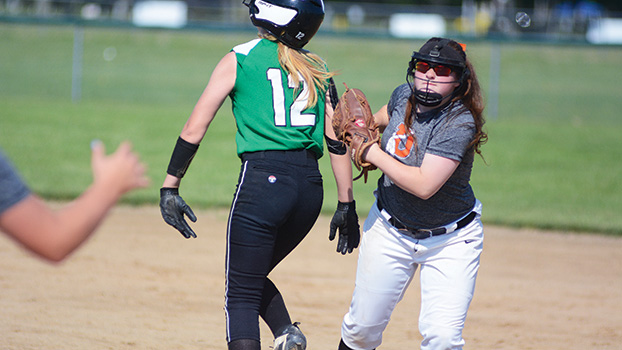 ALLEGAN — Elijah Williams’ sacrifice fly in the top of the 11th inning helped the Dowagiac baseball team to a sweep of host Allegan Thursday.

The Chieftains and Tigers were deadlocked at 2-2 when Duan Simpson singled to open the 11th inning and went to third on a sacrifice bunt by Cade Schreiber.

Hunter Brackensick sent Allegan down in order in the bottom of the 11th as Dowagiac completed the sweep with a 3-2 victory.

The Chieftains won the opening game 18-0 in four innings, scoring 10 times in the fourth to shorten the contest.

Brackensick picked up the victory in relief of starter Williams, who pitched the first eight innings.

Dowagiac finished with 10 hits, including two each from Simpson and Schreiber.

Brenden Dudley went 3-for-6 with a double and an RBI. Cody Dorman also doubled.

The Chieftains banged out 17 hits in the opening game.

Schreiber was 4-for-4 with an RBI, while Dudley and Dorman both finished with three hits. Dudley doubled and drove in a pair of runs.

Brackensick had two hits, including a double, and drove in three runs.

Dudley went the distance to pick up the victory on the mound.

He tossed a two-hitter with six strikeouts without a walk.

BERRIEN SPRINGS — The struggles of the Dowagiac softball team continued as the Chieftains went 1-4 in games against visiting St. Joseph on Thursday and at the Shamrock Invitational in Berrien Springs on Saturday.

The Chieftains were held to just two hits in the first game — singles by Madison Potter and Jessie Hulett.

On Saturday, the Chieftains scored all four of its runs over the first three innings and then had to hang on.

Dowagiac opened with three runs in the first inning and Dobberstein added a solo home run in the third inning to make it 4-0.

The Shamrocks scored a run in the sixth and two in the seventh before Smith was able to shut down the late rally.

The Chieftains had five hits, including a triple by Smith.

Against River Valley, Dowagiac had hits, including two by Froehlich.

Smith and Whitaker both doubled.

Brandywine scored a run in the bottom of the eighth to edge the Chieftains 6-5.

Using the International Rule for a tiebreaker, Riley Balos was put on second base with one out.

One out later, after Balos had advanced to third on a groundout, Kennedy Byrd hit a hard ground ball to second, which was not handled by Dowagiac for an error allowing Balos to score.

Makenna Gaideski had two hits for Dowagiac, including a double.

Smith also doubled for the Chieftains.

Byrd was 3-for-5 with three RBIs to lead the Bobcats, who also got singled by Alysa Adamcyzk, Nicole Sachman and Malikiyyah Abdullah all singled.