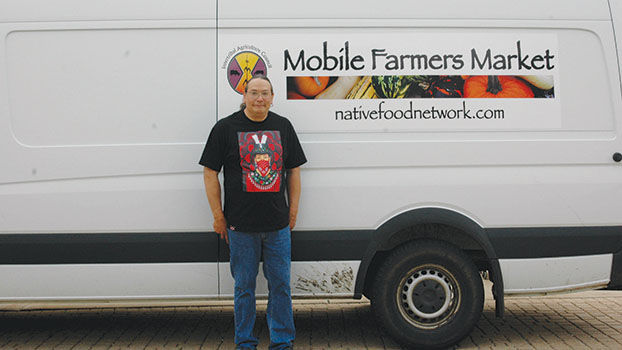 DOWAGIAC — Just before 5:30 p.m. Tuesday, Gary Morseau, chair of the Pokagon Band food sovereignty committee, hustled around a kitchen at the Pokagon Community Center, as he attempted to get a number of indigenous dishes prepared for serving prior to the arrival of many guests.

As he arranged arepas around a wild berry sauce and paired wild rice crackers with a cedar and sage white-bean dip, the scents of other foods cooking on the stove top wafted through the kitchen.

“This food is a callback to native food,” Morseau said. “It’s going to be really good.”

The event, which was the first of its kind in Dowagiac, also served as the first event hosted by the food sovereignty committee. The committee, which was formed in April 2017, works to reclaim native foods and traditions through prepping Pokagon agricultural land for organic farming, promoting indigenous foods at tribal events and reviving maple sugar and wild rice production on Pokagon land. The committee also works to connect different tribes together through food trade.

“A lot of us were interested in this kind of thing for a while, so we decided to do something about it,” Morseau said. “We just wanted to teach the community about eating right, healthy foods and supporting local farmers.”

Though Tuesday’s event was called an indigenous food event, Morseau said the food would be better described as “native fusion,” as many of the crops and ingredients that would be traditional to natives are now endangered or extinct.

This, however, is something the food sovereignty committee is hoping to change by working with the University of Michigan to once again produce native crops.

“We are working on a lot of big things right now,” Morseau said of the food sovereignty committee.

Director of Communications for the Pokagon Band Paige Risser said she was excited the indigenous food event was taking place and said she hoped another one would be hosted in the future.

Risser said she believed making native foods more prevalent in the community was a part of preserving the culture of the Pokagon Band, as food is so closely tied to people’s places in the world and their way of life.

“Events like this are important because they are all part of the tribe’s efforts to preserve and revitalize its culture,” she said. “Before European contact, the tribe had its own ways of hunting and gathering and growing food, its own language and its own traditions. All of that has changed over the course of the last several centuries. But now, the Pokagon Band is focused on bringing back the language and traditional ways. Food is a big part of that.”