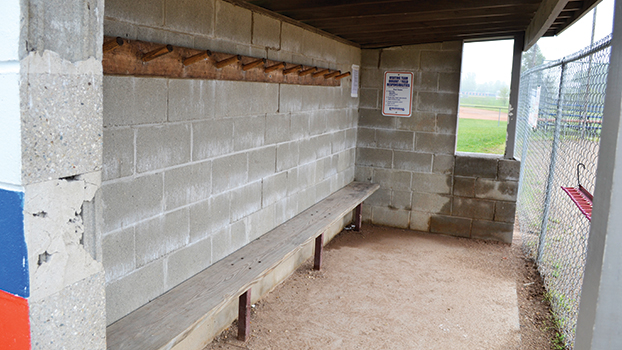 Pictured is Edwardsburg Little League, which has several pieces of equipment that need to be repaired. (Leader photo/EMILY SOBECKI)

EDWARDSBURG — Just behind Edwardsburg High School is the local little league facility, which was established in 1974 and has not changed much since.

Each of the fields in the park has two old cinderblock dugouts and are outlined by a rusted, chain link fence. The decaying blue bleachers that fans and parents sit on are chipped and covered with holes — some large enough to fit a small baseball bat through.

Despite the outdated, worn and broken equipment, the Edwardsburg Little League still provides a service to residents from May through July every summer, that is an inexpensive option for children to play t-ball, baseball and softball.

To help improve the facility, Shane Shidler, a little league volunteer and parent, is spearheading a capital campaign to raise money for the park through donations and sponsorships. He has worked with the park’s ground manager to determine what pieces of equipment need an upgrade the most.

“My goal is just to rally some support,” Shidler said. “I started this about two to three weeks ago, and Chemical Bank is going to give us $2,000 to support the park and my neighbor’s company over in Elkhart is going to give us a $1,000, so the money is starting to roll in.”

A few of the pieces of equipment that the little league would like donors to sponsor are a scoreboard, bleachers, a pitching machine, tools and game equipment such as helmets and bats.

“We’re looking to improve the safety of the park and the appearance of the park,” Shidler said. “Some of the members of the board have admitted that asking for money and going out and fundraising is not really their most favorite thing to do, so I said that I would be willing to step up and help out.”

In addition to individual sponsors, Shidler said he is hoping to find a business or person willing to match any donations that they receive.

He said another key aspect of improving the park is not only updating it, but also putting an emphasis on preventative maintenance. Recently, several board members went to the Detroit Tigers stadium to learn how to do just that.

“They are trying to learn more techniques for maintaining the fields that we have, so that once some investments come in to upgrade our facilities, we will make sure that we’re good stewards of those funds that have been raised,” he said. “We want to make sure that we can make those investments last as long as possible.”

The overall goal of the project is to ensure that Edwardsburg Little League is around for a long time, Shidler said, and in order to make that happen, the park needs to be updated.

“The fact that we have this park in our backyard is a wonderful thing,” he said. “Edwardsburg is a very small town, but the community has a big heart and it’s such a tightly wound community that we want to preserve this asset, and if we can, make it better. We know we compete a lot with the Edwardsburg Sports Complex [because they are] trying to expand the sports complex here in town. We’re not trying to create a park, we’re trying to … preserve it, make it better and carry it forward.”

CASSOPOLIS — In just a little more than a week, 56 students will turn their tassels at Ross Beatty Jr.-Sr.... read more