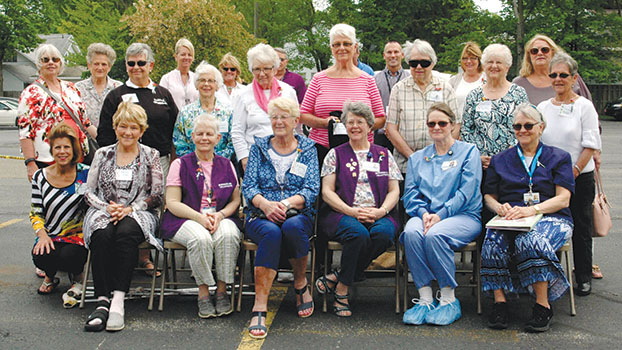 Members of the Wabigon Gardeners Club were recognized last week by Borgess Lee Memorial Hospital. The group cares for the gardens at the facility. (Leader photo/SARAH CULTON)

DOWAGIAC — Though many flowers were not yet blooming as of last week, Carolyn Strzyzykowski stood in front of a garden in the parking lot of Borgess Lee Memorial Hospital and talked about the beauty of the garden when the flowers bloom.

“Those flowers go a long way toward the beautification of the hospital,” Strzyzykowski, chaplin with Borgess Lee Memorial hospital, said. “And we have a group of special women to thank for that.”

Last week, as part of Borgess Lee Memorial Hospital’s 100th anniversary, the hospital hosted a recognition event for the Wabigon Gardeners Club, which cares for the gardens at Borgess Lee Memorial Hospital. The recognition event included a dedication of the gardens, the reveal of a board displaying the history of the club in the hospital and a small reception.

“This is our expression of appreciation to these women for all that these women have done,” Strzyzykowski said. “This is God’s earth and they are enhancing it by what they are doing.”

The Wabigon Gardeners Club, which has a history dating back to 1970, began caring for the grounds at Borgess Lee at the suggestion of Earline Jones, who describes herself as a “gardener at heart.” She was special care RN at Borgess Lee for many years, and while working there, she always appreciated the blooming roses she saw when she looked outside of patients’ windows. After a particularly harsh winter, she saw that the snow plows had taken out the rose bushes, which prompted her to action. Currently, the gardens contain a wide variety of plants including day lilies and peonies.

Jones added that she has always enjoyed donating her time to taking care of the gardens, in order to make the hospital more visually appealing and bring joy to those who see the flowers.

“It’s important for patients to be able to look out the window and see plants. That is very enjoyable,” Jones said.

Jones said she was glad that the hospital wanted to honor the Wabigon Gardeners Club, and said that she was very surprised that the event took place.

“It was a surprise to know they were going to recognize us,” Jones said. “That was very nice.”

It is because Jones and the other members of the Wabigon Gardeners Club were surprised by the event is why it had to take place, Strzyzykowski said.

“These women had no idea how appreciated they are,” Strzyzykowski said. “We just wanted to say thank you to them.”

Cassopolis Public Schools shows a commitment to the arts