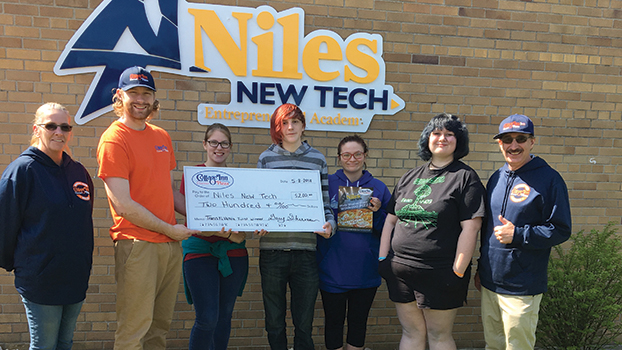 Cottage Inn officials presented a $200 check to Niles New Tech students Tuesday. The pizza restaurant sold a New Tech invented recipe called the “Transylvania Twist,” and for every pizza sold, the school got a $1 back. (Submitted photo)

“We were getting calls asking for the pizza,” Sherman said, “even after it was taken off the menu.”

“We thought [naming the pizza] something with vampires would be fun, since our pizza used garlic,” Shirk said.

Their pizza was sold at the Cottage Inn from Dec. 1 to March 1. For every pizza that sold, Cottage Inn donated $1 back to the school. On Tuesday, Cottage Inn officials presented a check for $200 to New Tech learners.

Customers craving the “Transylvania Twist,” will once again be able to sink their teeth (so long as they are not a vampire) into the pizza. Sherman has entered the “Transylvania Twist” into a corporate contest. The pizza will be available at the Cottage Inn from July 1 to Aug. 31. Based on sales, the pizza could be used for another campaign, according to Sherman.

Niles New Tech is a project-based learning school and this assignment is just one example of the institution’s goal to involve its youth in projects that incorporate the community. Through world studies, students learn a fusion of history/geography and English. The course is taught by Emily Krassow, Maria Culbertson, Kristin Adams-Bondy and Nicholas Hawley.

To teach students to create an authentic business model for a product, while learning about the origins and history of the spice trade, teachers tasked students in October with creating their own pizza. Learners were assigned a spice to build their recipe around. The project finished with a pitch, in which learners tried to sell the pizza to representatives from Cottage Inn Pizza or Pizza Transit, depending on which class they were in. After their pitch, restaurant officials sampled learners’ recipes.

When creating the “Transylvania Twist,” Shirk said he and his fellow learners agreed that garlic paired well with chicken and they started to toss out other ingredients that would further complement the spice.

Shirk said he was not initially sure how judges would react once they tried their pizza.

“It was interesting to bring it in for the judges and have them taste it,” Shirk said. “You could tell at first that they were not so sure how it would taste … And then immediately after [they tasted it], you could tell they enjoyed it. They ate most of the [samples].”

Prior to the taste test, students spent time experimenting in the kitchen. Cottage Inn officials allowed students to use their kitchen and work with some of their employees to develop the pizza.

Jesswein added that a cool aspect to the project was seeing what they created being used in their community and she felt it inspired her.

“To have something used in the real world [was really cool],” Jessewin said. “You should not be afraid to throw your ideas out there and make something different for a change.”

“Getting young people involved with this kind of stuff and this kind of culture pushes them to do more career-based stuff with their creativity,” Shirk said. “More of pushing themselves into the work force, getting them to know a kitchen or office environment.”

Cottage Inn did make a few alterations to the students’ recipe. They got rid of the original stuffed crust and eliminated one of the cheeses, but students’ design and concept for the pizza remained the same.

Sherman said he enjoyed the opportunity to work with the school and the learners.

“They have great ideas and we enjoyed working with them,” Sherman said. “Not just this group, but the whole group.”

For his part, Hawley said he hopes to use the businesses in next year’s project, which could once again produce a whole new pizza to entice customers.

“There was a lot of gratitude to the business partners for offering their assistance for the project,” Hawley said.

As to the donated funds, Hawley said the money has not been earmarked at this point, but will likely help to support a future program.