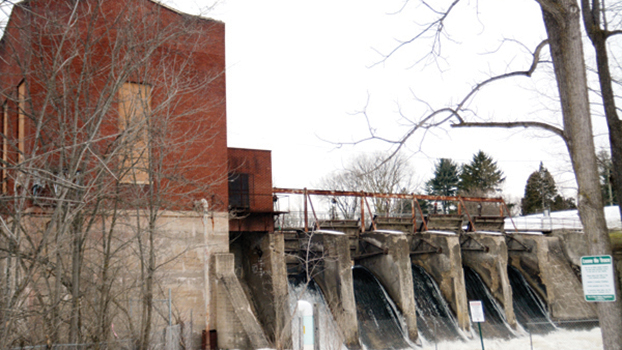 NILES — Plans to remove the Pucker Street Dam and restore the Dowagiac River are still in the works, but appear to be getting more complicated.

On Monday, city council members voted on a proposal to accept easements for the project, which will allow officials to have access to landowners’ property for the purpose, if those residents agree to it. While city council members’ votes were unanimously in support to accept the easements, talk turned contentious when a property owner spoke out against the decision.

Paul Schimel, who lives on the 2900 block of N. Fifth St., told council members he felt like he had been lied to and that the property that was rightfully his was being altered through the process.

Schimel was joined at Monday night’s meeting by approximately four other neighbors, who did not speak but said they attended the council meeting for shared concerns.

In a follow up interview after Monday’s meeting, Schimel said the dam removal will impact his property by taking away the view Dowagiac Creek from his house while creating a deeper canyon where the river runs near his home.

“We won’t be able to see the river from my property anymore, because it [the water] will be down so low,” Schimel said.

However, Schimel said he did not have any opposition to the dam’s removal.

Still, he said he felt residents’ concerns have not been addressed and he hopes to see a plan developed that will have less impact to those who call the area home.

City Administrator Ric Huff said the proposal that passed Monday night applies only to land owners who agreed to the easements. As compensation, the city offered land owners $1 for the agreement. Of the about 40 that had agreed, none wanted the dollar, Huff said.

Huff approximated that about 70 properties south of Kinzie to the Pucker Street Dam will be impacted. He said the city has been working with those property owners for the past three years and more than half seem compliant with the easement. For those who are not, Huff said the city will continue to work with property owners to reach an agreement. As to whether that will mean more compensations, Huff said it is “completely unknown.”

Property owners will experience varying degrees of change during the removal of the dam, based on what section of the river they are located near. In some areas the water level will be altered, as well as the slope of the river bank.

Additionally, Huff said the city will make improvements to the former Losensky Park, which the city took back from Niles Charter Township.  The area is now referred to as the Pucker Street Dam Park.

During the demolition and remediation of the dam and river, the park will be temporarily closed, but the plan is to improve the park and maintain it for river access and recreation, Huff said.

The Pucker Street Dam removal has been years in the making. The city has owned the dam since 1894. The dam produced power for about 60 years, until various maintenance problems prevented it from doing so. The dam has not produced power since 1993.

Last year, Falling Waters, a hydroelectric redevelopment company, advocated for the city officials to change their minds about removing the dam and instead allow the company to restore it. However, city officials cited a lack of financial planning, and several other issues on Falling Waters part and rejected the proposal for restoration.

Plans to remove the dam are projected to cost about $3 million. The city has received a number of grants to help cover some of this cost. Residents have also been paying an electrical surcharge at a rate of about $2.50 a month to fund the project. The aim of the dam’s removal is to restore about two miles of the body of water to a free-flowing river, according to information from the Southwest Michigan Planning Commission.

During Monday’s meeting, councilmember Daniel VandenHeede agreed and said access to these key residents’ property was necessary to restore the river.

“I know there is uncertainty and people are scared of what might happen,” VandenHeede said. “I guess our purpose here is to look after what is in the best benefit of everybody [who is] a citizen of Niles and those who live near the river and are affected by the dam. We certainly hope that this is going to create a better river and a faster river.”

VandenHeede said he grew up near the dam and that he has family that currently live there and will be affected by the project.

Residents in this area have had to deal with changes to the river before. VandenHeede said about 20 years ago, the dam was opened up, which narrowed the river channel and sped up the river.