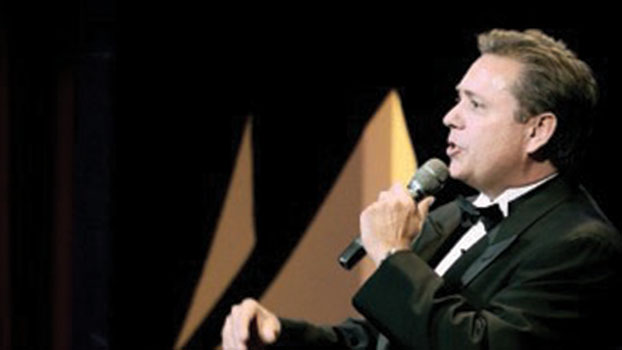 Stevie Swing performs Frank Sinatra covers at an event. Swing will be visiting the Niles Elks Lodge to perform May 18. (Submitted photo)

NILES — A favorite Chicago crooner and retro entertainer Stevie Swing will perform his premier tribute to the music of Frank Sinatra at 7 p.m. Friday, at the Niles Elks Lodge.

“With the 20th anniversary of Frank Sinatra’s death this past Monday, it seemed a perfect time to pay tribute to a performer who was one of the most popular and influential musical artists of the 20th Century,” said Julie Clark, trustee chairman at the lodge. “Stevie does an amazing job in transporting the audience back to that era. If you are a Sinatra fan or a fan of music from that time period, I don’t think you’re going to want to miss this.”

Chicago born and raised, Steve Jacobs (aka Stevie Swing) has gained the reputation as a popular and versatile retro singer, crooner and Frank Sinatra tribute artist, entertaining audiences and bringing music lovers to their feet for more than 20 years. But it is for his popular tribute to Sinatra that he is most known by fans.

With a rich baritone voice, dynamic phrasing and presence, the sultry ‘n swingin’ sounds of Frank are all here. His popular Chicago-based Frank Sinatra tribute, performed as, and true to, a Sinatra concert, includes timeless fan favorites and often includes other Rat Pack favorites.

Tickets are $15 and available at the Elks Lodge, 1322 Canal St. in Niles. Doors open at 6 p.m., show starts at 7 p.m. Table snacks provided. Reservations suggested but not required. Seating is limited. The lodge is open 2 to 8 p.m. Tuesday and Saturday.