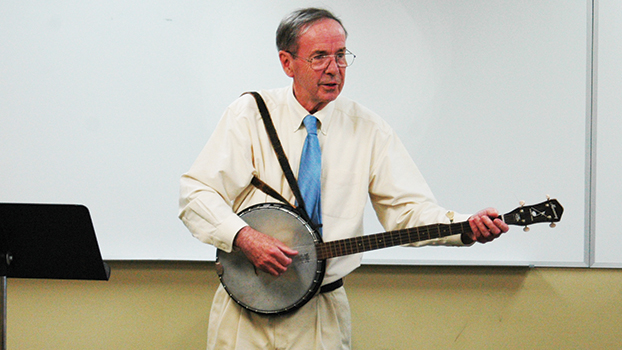 DOWAGIAC — With a banjo tucked under the crook of his arm, international storyteller Ed Stivender played a few strings as he asked a room of people at the Front Street Crossing COA what they loved about storytelling Tuesday evening.

“I’ve just always loved the art of storytelling,” said Dowagiac resident and Dogwood Fine Arts Festival volunteer Jennifer Ray when it was her turn to speak. “I just find it very enjoyable.”

Putting his banjo down on a table beside him, Stivender said that he was working with a good group that night and was excited to work with them on storytelling.

The Dogwood Fine Arts Festival welcomed renowned storyteller Stivender to participate in the festival Tuesday and Wednesday as the 2018 storyteller. Tuesday evening, Stivender hosted a storytelling masterclass, where he taught a small audience how to become storytellers at the COA. On Wednesday, evening, he performed a solo act at Southwestern Michigan College.

Stivender, who has been called “the Robin Williams of storytelling” by the Miami Herald, is well-known within the storytelling circuit. Since turning his story-telling into a full-time job in 1977, he has amassed a number of awards and accolades, including being inducted into the National Storytelling Association Circle of Excellence.

Describing storytelling as “stand-up comedy for people with attention spans,” Stivender believes that storytelling is as much an art as a fine painting or a string quartet.

“[Storytelling] is an art form because there is no such thing as unfiltered truth,” he said. “When one crafts a story it becomes art, because they take an idea and put it into words and form.”

Stivender said that he has always loved storytelling and can remember practicing the craft when he was just 7 years old when he and his sister would charge their neighbors a penny for the pleasure of hearing the Stivenders retell fairy tales.

Others can get into storytelling through joining local groups and getting all the experience they can telling stories, Stivender said. During his masterclass, Stivender offered attendants a number of pieces of advice to enhance their storytelling, including researching their stories, seeking out feedback and working to identify “hot spots” within material.

“I guess my biggest piece of advice is to not wait until you are ready to perform,” Stivender said. “Just jump in.”

Stivender said that he would encourage everyone to experience storytelling and that he hopes his master class was able to help those in the audience.

“There is a certain magic to storytelling,” he said. “I want everyone to experience that.”