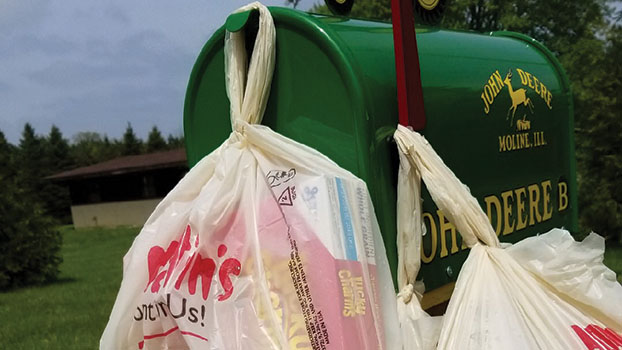 Residents were able to leave boxed and canned foods by their mailboxes for the post office employees to round up and bring to the donation collectors. (Submitted photo)

“There were several things that we were just about out of, such as soups,” said Niles Salvation Army Volunteer Coordinator Tim Douglas.

Other area food pantries tend to experience the same need this time of year, since most donations come in around the holiday season. But thanks to the Stamp Out Hunger food drive, the Niles Salvation Army and food pantries across Berrien and Cass counties, got the chance to stock their shelves.

The annual food drive is put on by the National Association of Letter Carriers. Each year, people across the country put nonperishable food donations next to their mailbox for donation to local pantries.  Niles postal worker Johnny Hernandez said volunteers helped carriers to collect the food and bring it back to the post office. Donations were given to the Niles Salvation Army, the St. Mary’s Christian Service Center and First Presbyterian Church. In Buchanan, carriers collected donations for the Redbud Area Ministries. Dowagiac, Edwardsburg and Cassopolis postal carriers also collected donations for their respective pantries.

“Those were better numbers than last year,” Hernandez said. “Any time there is in an increase, it is great.”

For Douglas, the donations come at a time when the food pantry is not only running low, but also when more food is needed to support families during the summer months.

Douglas said he was proud to see the communities of Berrien and Cass counties come together once again to support their local food pantries.

Hernandez said the food drive could not have been a success without residents and local businesses’ participation. Local restaurants provided food for letter carriers and more than 50 volunteers who worked to collect donations Saturday in Niles. These businesses included: Kentucky Fried Chicken, Subway, Jimmy John’s, Pizza Transit, El Amigo Pepe, Front Street Pizza, and Saylor’s Pizza Port. Staff from UPS also donated supplies to the cause.

“It really takes a community of people who care to make our food drive a success and we definitely witnessed that this year,” Hernandez said.

NILES — A free health clinic that will serve those without health insurance is coming to Niles. HERBIE Health Clinic... read more