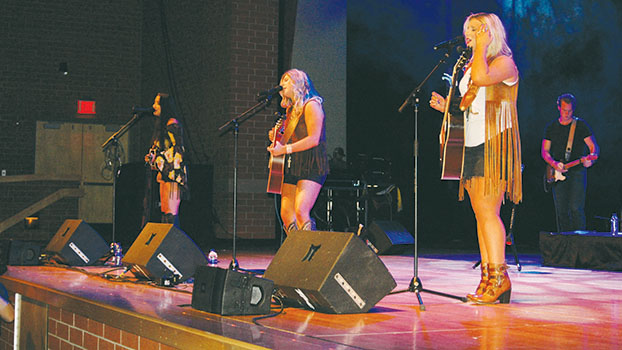 DOWAGIAC — Surrounded by blue lights and smoke, Alabama native Kate Falcon detangled herself from an acoustic guitar around her neck and jumped down from a stage in Dowagiac, the fringe on her brown crop top swaying with her as she landed.

“This just won’t do,” she spoke into a microphone to a sparse, unenthusiastic crowd. “I’m going to need y’all to get excited.”

Falcon preceded to weave herself through the aisles of the venue, dancing and singing with the crowd, until eventually, every head in the house was bouncing along with the music that Falcon and the band with her was playing.

“That’s great,” Falcon’s voice echoed through the microphone. “You guys are a great crowd.”

As part of the Dogwood Fine Arts Festival, the Sweet Tea Trio, an up-and-coming country music act out of Alabama, played Saturday at the Dowagiac Middle School Performing Arts Center. Though the band has toured with famous country music acts such as Kid Rock and Randy Travis, Saturday’s show undersold, as Dogwood officials sold less than one-fourth of the seats in the auditorium.

A number of factors could have attributed to the low turnout, from competing events to the Mother’s Day weekend to the fact that the Sweet Tea Trio is the first country music group to play the Dogwood Festival, Benedix said.

“There is always risk involved,” he said. “But we want to keep providing new things, and we are excited to have [the Sweet Tea Trio] with us tonight.”

Despite the many empty seats staring back at them, members of the Sweet Tea Trio — Falcon, Savannah Coker and Victoria Camp — managed to engage the crowd and get them excited about the music.

Take, for example, Ben Weber and Heather Montgomery, Dowagiac residents who were in the crowd for Saturday’s performance. As Falcon, lead vocalist for the Sweet Tea Trio, was performing in the crowd, Falcon sat herself next to the pair and had Weber sing back to her the lyrics to a Shania Twain song.

“I loved it,” Montgomery laughed as she recalled the incident. “It was so fun.”

Like many of the attendants Saturday, the pair said they had never listened to the Sweet Tea Trio’s music before, but attended the performance because they believed it could be a fun night out. Despite this, Weber and Montgomery said they were charmed by the trio and impressed with their music enough to listen to the band again.

Working with the crowd they are given, no matter how big or how small, is something the Sweet Tea Trio always does, its members said.

“For smaller concerts like this, we really tailor things and make them more personal,” Camp said. “We tell more stories. We add a couple of acoustic songs, things like that.”

The Dowagiac crowd saw every trick the trio had in their repertoire Saturday, as the musical group did everything they could to get the audience interested and on their feet — from playing covers of popular rock-and-roll songs to telling stories about their love lives to having the audience give them a lesson in the pronunciation of the city (Dow-ee-shack, as Camp first called it).

“We love engaging with the audience,” Falcon said. “And we love putting on a good show. We have so much fun together. We are best friends, so the fun we have up there is real, and we want the audience to feel that.”

Once the trio was able to get the Dowagiac crowd excited about their music, the members of the Sweet Tea Trio said they enjoyed their performance Saturday and would happily come back to Dowagiac.

Like Weber and Montgomery, Benedix said he was impressed with the show put on by the Sweet Tea Trio and said that he would be interested in booking them again for the Dogwood Festival.

“Nothing is off the table for next year,” he said. “But I think they did a great job. … I think they are up and coming. This time next year, I think everyone in the audience will know who they are.”

DOWAGIAC — Dowagiac families and youth were out and about Saturday, despite misty rain, searching for clues around town. As... read more